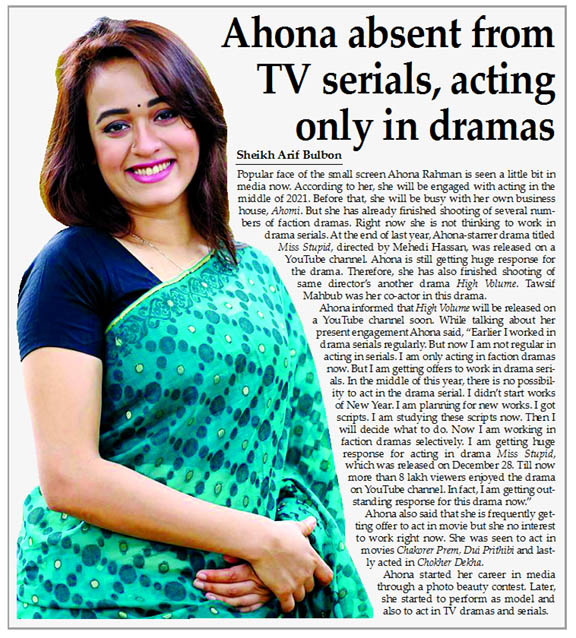 Sheikh Arif Bulbon :
Popular face of the small screen Ahona Rahman is seen a little bit in media now. According to her, she will be engaged with acting in the middle of 2021. Before that, she will be busy with her own business house, Ahomi. But she has already finished shooting of several numbers of faction dramas. Right now she is not thinking to work in drama serials. At the end of last year, Ahona-starrer drama titled Miss Stupid, directed by Mehedi Hassan, was released on a YouTube channel. Ahona is still getting huge response for the drama. Therefore, she has also finished shooting of same directorâs another drama High Volume. Tawsif Mahbub was her co-actor in this drama.
Ahona informed that High Volume will be released on a YouTube channel soon. While talking about her present engagement Ahona said, âEarlier I worked in drama serials regularly. But now I am not regular in acting in serials. I am only acting in faction dramas now. But I am getting offers to work in drama serials. In the middle of this year, there is no possibility to act in the drama serial. I didnât start works of New Year. I am planning for new works. I got scripts. I am studying these scripts now. Then I will decide what to do. Now I am working in faction dramas selectively. I am getting huge response for acting in drama Miss Stupid, which was released on December 28. Till now more than 8 lakh viewers enjoyed the drama on YouTube channel. In fact, I am getting outstanding response for this drama now.â
Ahona also said that she is frequently getting offer to act in movie but she has no interest to work right now. She was seen to act in movies Chakorer Prem, Dui Prithibi and lastly acted in Chokher Dekha.
Ahona started her career in media through a photo beauty contest. Later, she started to perform as model and also to act in TV dramas and serials.Â Â Â