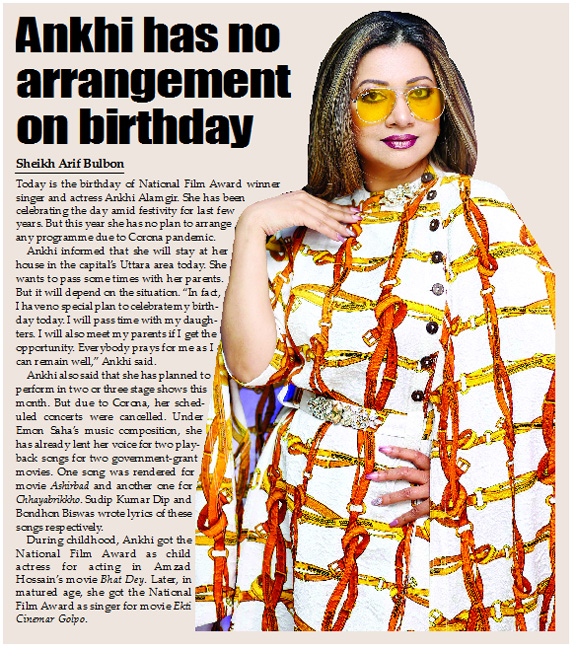 Sheikh Arif Bulbon :
Today is the birthday of National Film Award winner singer and actress Ankhi Alamgir. She has been celebrating the day amid festivity for last few years. But this year she has no plan to arrange any programme due to Corona pandemic.
Ankhi informed that she will stay at her house in the capitalâs Uttara area today. She wants to pass some times with her parents. But it will depend on the situation. âIn fact, I have no special plan to celebrate my birthday today. I will pass time with my daughters. I will also meet my parents if I get the opportunity. Everybody prays for me as I can remain well,â Ankhi said.
Ankhi also said that she has planned to perform in two or three stage shows this month. But due to Corona, her scheduled concerts were cancelled. Under Emon Sahaâs music composition, she has already lent her voice for two play-back songs for two government-grant movies. One song was rendered for movie Ashirbad and another one for Chhayabrikkho. Sudip Kumar Dip and Bondhon Biswas wrote lyrics of these songs respectively.
During childhood, Ankhi got the National Film Award as child actress for acting in Amzad Hossainâs movie Bhat Dey. Later, in matured age, she got the National Film Award as singer for movie Ekti Cinemar Golpo.Â