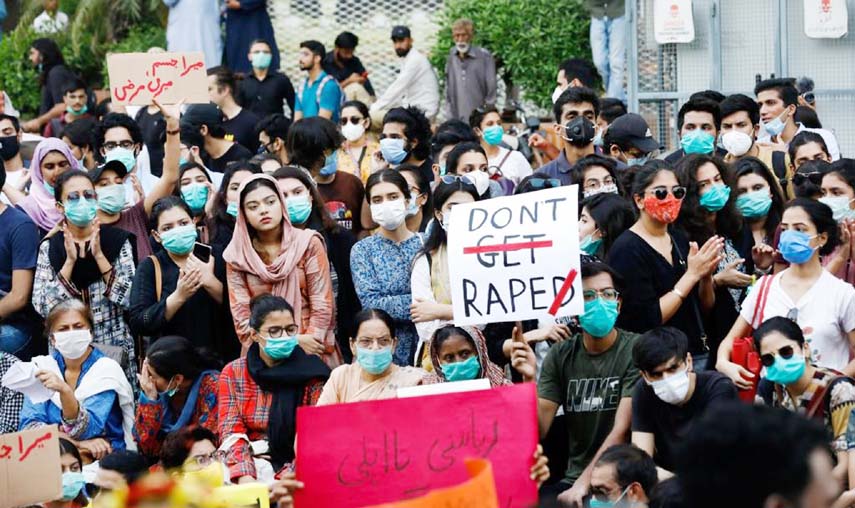 People carry signs against a gang rape that occurred along a highway and to condemn violence against women and girls, during a protest, in Karachi. Agency Photo

Pakistan's Lahore High Court has declared that the two-finger test (TFT) and the hymen test for the purposes of ascertaining virginity of a female victim of rape or sexual abuse as illegal and unconstitutional.
"The virginity test offends the personal dignity of the female victim and therefore is against the right to life and right to dignity enshrined in Articles 9 and 14 of the Constitution," says a 30-page judgement authored by Justice Ayesha A Malik, allowing two identical petitions against the practice of the objectionable test, reports Pakistani English daily Dawn.
The judge also declared that the virginity tests are discriminatory against the female victim as they are carried out on the basis of their gender, which therefore offends Article 25 of the country's constitution.
The ruling followed two petitions filed in Punjab province by rights activists.
Campaigners have long demanded an end to virginity tests as part of the medical evaluation in rape cases, saying they have no scientific basis.
The "two-finger test" is performed manually by inserting one or two fingers into a woman's vagina to test for its laxity and for the presence of a hymen - in theory to determine whether or not the woman is sexually active and to what extent, reports BBC.
Some doctors claim the test can determine if a woman has been penetrated for the first time, and the test has been used to discredit victims of rape who are judged to be sexually experienced.
The World Health Organisation has categorically debunked the test, saying it has no scientific merit and is a human rights violation.
In her ruling, Justice Malik said the test was "highly invasive" and had "no scientific or medical requirement."
"It is a humiliating practice, which is used to cast suspicion on the victim, as opposed to focusing on the accused and the incident of sexual violence," she said in the judgement.