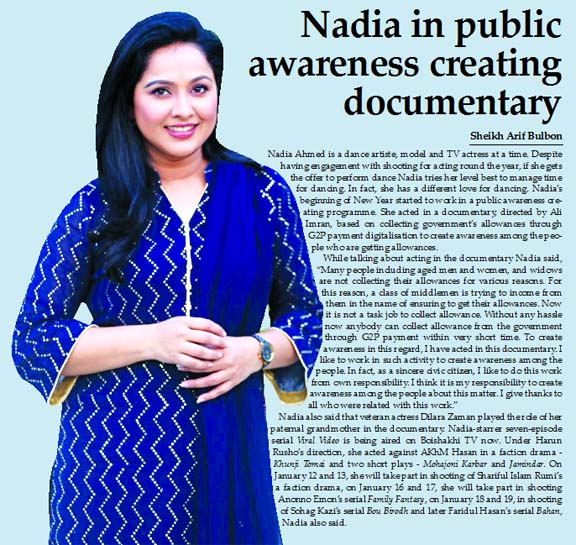 Sheikh Arif Bulbon :
Nadia Ahmed is a dance artiste, model and TV actress at a time. Despite having engagement with shooting for acting round the year, if she gets the offer to perform dance Nadia tries her level best to manage time for dancing. In fact, she has a different love for dancing. Nadiaâs beginning of New Year started to work in a public awareness creating programme. She acted in a documentary, directed by Ali Imran, based on collecting governmentâs allowances through G2P payment digitalisation to create awareness among the people who are getting allowances.
While talking about acting in the documentary Nadia said, âMany people including aged men and women, and widows are not collecting their allowances for various reasons. For this reason, a class of middlemen is trying to income from them in the name of ensuring to get their allowances. Now it is not a task job to collect allowance. Without any hassle now anybody can collect allowance from the government through G2P payment within very short time. To create awareness in this regard, I have acted in this documentary. I like to work in such activity to create awareness among the people. In fact, as a sincere civic citizen, I like to do this work from own responsibility. I think it is my responsibility to create awareness among the people about this matter. I give thanks to all who were related with this work.â
Nadia also said that veteran actress Dilara Zaman played the role of her paternal grandmother in the documentary. Nadia-starrer seven-episode serial Viral Video is being aired on Boishakhi TV now. Under Harun Rushoâs direction, she acted against AKhM Hasan in a faction drama - Khunji Tomai and two short plays - Mohajoni Karbar and Jamindar. On January 12 and 13, she will take part in shooting of Shariful Islam Rumiâs a faction drama, on January 16 and 17, she will take part in shooting Anonno Emonâs serial Family Fantasy, on January 18 and 19, in shooting of Sohag Kaziâs serial Bou Birodh and later Faridul Hasanâs serial Bahan, Nadia also said.Â Â