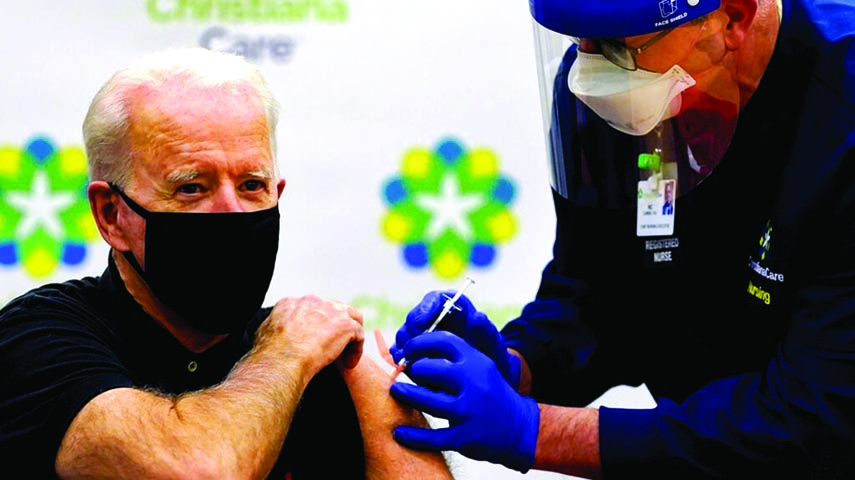 Fox News :
President-elect Joe Biden received his second and final dose of the Pfizer coronavirus vaccine at a Delaware hospital Monday.
Biden pulled off his sport jacket to reveal a dark, short-sleeve T-shirt underneath and said, "Ready, set, go." Chief Nurse Executive Ric Cumin administered the vaccine at Christiana Hospital in Newark, Delaware, close to president-elect's home. In brief comments to reporters after his shot, Biden said he has confidence in his COVID-19 combating team to hit ambitious vaccination-rate targets after he takes office on Jan. 20. He also called the current rate of thousands of people dying daily "beyond the pale."
Biden says he has spoken to Senate leaders about splitting time between approving his key Cabinet nominations and proceeding with a possible impeachment trial against President Donald Trump.
Biden's transition team has vowed to release as many vaccine doses as possible, rather than continuing the Trump policy of holding back millions of doses to ensure that there would be enough supply to allow those getting the first shot to get a second one. Biden's goal is protect more people, more quickly, his team announced last week.
The plan would not involve cutting two-dose vaccines in half, a strategy that top government scientists recommend against. Instead, it would accelerate shipment of first doses and use the levers of government power to provide required second doses in a timely manner.
Biden said more details of his vaccine plan would be coming Thursday.
Biden received his first shot, along with his wife Jill Biden, on Dec. 21. The virus has now killed nearly 375,000 people in the United States - about 60,000 more than when the president-elect got his first round of vaccination.
Pfizer's vaccine was the first authorized by the FDA and must be administered in two doses, three weeks apart. In clinical trials, the vaccine was 95% effective at preventing illness and showed no short-term safety issues.
President Donald Trump has not said when he intends to get the shot. He tweeted in December that he was "not scheduled" to take it, but said he looked "forward to doing so at the appropriate time."
Trump was hospitalized with COVID-19 in October and given an experimental monoclonal antibody treatment that he credited for his swift recovery. A Centers for Disease Control and Prevention advisory board has said people who received that treatment should wait at least 90 days to be vaccinated to avoid any potential interference.
Other notable officials who received the coronavirus vaccine include Vice President Mike Pence and Karen Pence, Vice President-elect Kamala Harris and Dr. Anthony Fauci.
More than 22 million doses of vaccines had been distributed as of Monday, but fewer than 7 million people had received their first of the two-dose shots, according to the Centers for Disease Control and Prevention.
This comes as the United States has more than 22.4 million confirmed coronavirus cases and over 374,000 confirmed deaths, according to data complied by Johns Hopkins University. More than 129,000 were currently hospitalized with coronavirus, according to The COVID Tracking Project.
Last week, the U.S. registered more COVID-19 deaths in a single day than ever before, topping 4,085 deaths reported on Thursday, an all-time high. Data shows the virus increasing in almost every state, with New York, Texas and California ranking in the top three with the most COVID-19 deaths.
The Department of Health and Human Services (HHS) announced a total of $22 billion in funding for states, localities, and territories in support of the nation's response to the COVID-19 pandemic. HHS said $3 billion for vaccine efforts should go out to states by Jan. 19, along with $19 billion of additional aid for coronavirus testing and contact tracing. The money comes from congressional legislation passed at the end of last year.