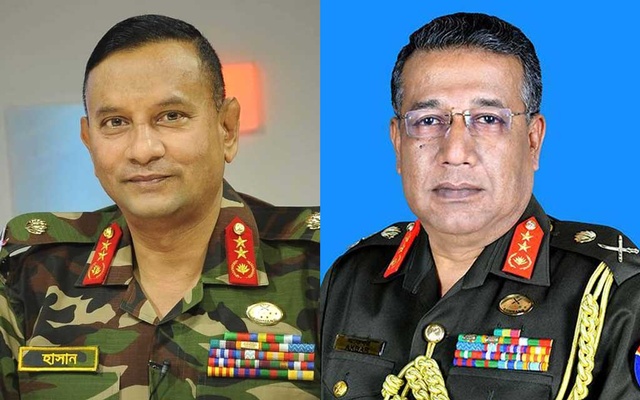 In a major shake-up to top posts of the Bangladesh Army, Lt Gen Ataul Hakim Sarwar Hasan, commandant of National Defence College, has been transferred to the forceâs headquarters as the chief of general staff.
Major General Md Akbar Hossain, commandant of Defence Services Command and Staff College, has been promoted to lieutenant general and made commandant of NDC.
A top official in the government confirmed the news of their transfer and promotion to bdnews24.com on Tuesday.
Gen Sarwar Hasan took charge as the NDC commandant on Dec 1 last year, around one and a half months before he has been given the important job of CGS.
Commissioned in the Corps of Infantry on in December 1984, Gen Hasan had served as the vice-chancellor of Bangladesh University of Professionals, general officer commanding of the 55 Infantry Division in Jashore, and commander of Logistics Area, Dhaka Cantonment.
Prior to joining DSCSC, Gen Akbar had worked as the GOC of the 9th Infantry Division in Savar and director general of the Directorate General of Forces Intelligence.
He was commissioned in the Artillery Corps in 1985 as a cadet of the 13th BMA Long Course. His promotion will be effective from the day of him joining his new workplace, a government order said.