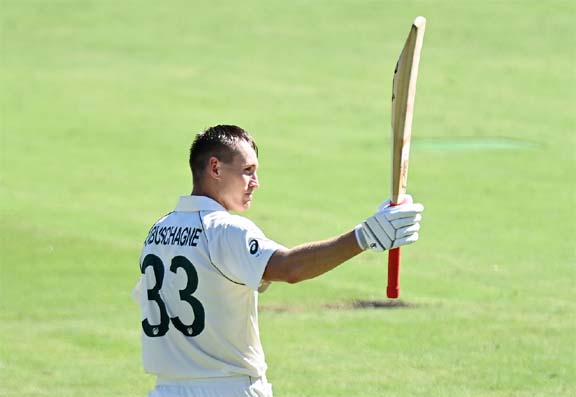 Agency :
Marnus Labuschagne rode his luck to score a century and give Australia the upper hand against a depleted Indian attack on Day One of the fourth and final Test against India at The Gabba in Brisbane. Dropped twice in his innings, Labuschagne made 108, with Australia finishing the day on 274 for 5.
At stumps, Cameron Green (28) and Tim Paine (38) were in the middle. India were forced to go in with one of their most inexperienced attacks but did a decent job, with debutant T Natarajan picking up two wickets while Mohammed Siraj, Washington Sundar and Shardul Thakur got one apiece.
India also dropped three catches in the day, while also losing Navdeep Saini to an injury.
Australia opted to bat first but got off to a poor start as both David Warner and Marcus Harris were dismissed with just 17 runs on the scoreboard.
Warner was the first to go, caught in the slips in the very first over of the innings bowled by Mohammed Siraj, Rohit Sharma taking a good, low catch at second slip dismiss the opener for just 1.
Harris, who was replacing the injured Will Pucovski, hung around for a while but fell in a soft manner in Shardul Thakur's first ball of the match. Harris gently flicked an inswinger straight into the hands of square leg and walked back for 5.
With the ball moving around in air, Labuschagne and Steve Smith did well to settle Australia and saw off some spin from Washington Sundar before taking them to lunch at 65 for 2.
After the break, both Steve Smith and Labuschagne began in an aggressive fashion but the former fell against the run of play, giving Washington Sundar his first wicket in Tests.
Smith flicked a full delivery straight to short mid wicket to fall for 36. India could've got their fourth wicket soon after that had skipper Ajinkya Rahane not dropped the catch of Labuschagne at gully against Navdeep Saini.
To make things worse, Saini went off the field with a groin injury and has been taken for scans. There was some more bad luck or catching, as Pujara put down a tough chance at slip off Labuschagne, Natarajan being the unfortunate bowler.
Wade, who came to bat after the fall of Smith's wicket, started off slowly but once he got set, the left-handed batsman stitched a partnership with Labuschagne to take Australia to 154 for 3 at tea. The scoring rate steadily increased as the partnership stretched, as India's inexperience began to show.
Labuschagne went past his century and looked set for a lot more even as Wade approached his half-century. But it all changed in quick time as Natarajan came for another spell with the old ball.
With some reverse swing on offer, Natarajan went for a short-of-length approach, making the batsmen play across the line. Wade tried doing that but miscued a shot straight to mid on for 45. In Natarajan's next over, Labuschagne looked to pull but only got a top edge to Pant.
At 213 for 5 with two new batsmen in the middle, India would have fancied their chances of bowling Australia out for a moderate total. However, captain Tim Paine and Cameron Green dashed such hopes with a steady partnership to keep Australia going.
The duo was steady but also played shots when on offer, ensuring India never got on top. Yet again, there was an opportunity for India just before the second new ball was taken; Green gave a return catch to Thakur but the bowler could not hold on.