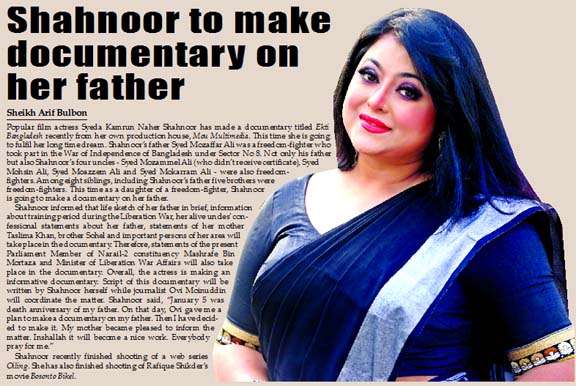 Sheikh Arif Bulbon :
Popular film actress Syeda Kamrun Naher Shahnoor has made a documentary titled Ekti Bangladesh recently from her own production house, Mou Multimedia. This time she is going to fulfil her long time dream. Shahnoorâs father Syed Mozaffar Ali was a freedom-fighter who took part in the War of Independence of Bangladesh under Sector No 8. Not only his father but also Shahnoorâs four uncles - Syed Mozammel Ali (who didnât receive certificate), Syed Mohsin Ali, Syed Moazzem Ali and Syed Mokarram Ali - were also freedom-fighters. Among eight siblings, including Shahnoorâs father five brothers were freedom-fighters. This time as a daughter of a freedom-fighter, Shahnoor is going to make a documentary on her father.
Shahnoor informed that life sketch of her father in brief, information about training period during the Liberation War, her alive unclesâ confessional statements about her father, statements of her mother Taslima Khan, brother Sohel and important persons of her area will take place in the documentary. Therefore, statements of the present Parliament Member of Narail-2 constituency Mashrafe Bin Mortaza and Minister of Liberation War Affairs will also take place in the documentary. Overall, the actress is making an informative documentary. Script of this documentary will be written by Shahnoor herself while journalist Ovi Moinuddin will coordinate the matter. Shahnoor said, âJanuary 5 was death anniversary of my father. On that day, Ovi gave me a plan to make a documentary on my father. Then I have decided to make it. My mother became pleased to inform the matter. Inshallah it will become a nice work. Everybody pray for me.â
Shahnoor recently finished shooting of a web series Oiling. She has also finished shooting of Rafique Shikderâs movie Bosonto Bikel.Â Â Â Â Â Â Â Â