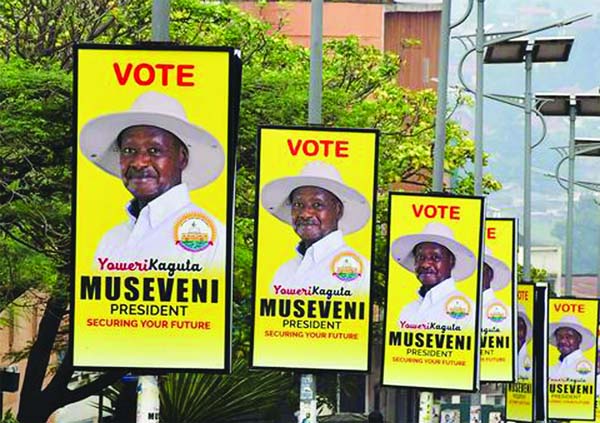 Reuters :
Long-time leader Yoweri Museveni was heading for a resounding win in Uganda's presidential election with nearly all votes counted on Saturday, but his main rival Bobi Wine alleged widespread fraud and said citizens should reject the result.
With ballots from 91% of polling stations counted following Thursday's election, Museveni had won 5.6 million, or 58.9%, while main opposition candidate Wine had 3.3 million votes (34.6%), the Electoral Commission said just after 12 p.m. (0900 GMT). Final results were expected at 3 p.m (1200 GMT), it said.
In a phone interview with Reuters, Wine accused Museveni of fabricating the results and called the poll "the most fraudulent election in the history of Uganda". He urged citizens to reject the results.
Wine, a singer-turned-lawmaker, also said his home in the capital, Kampala, was surrounded by hundreds of soldiers and that the military was not allowing him to leave.
The army's deputy spokesman, Deo Akiiki, told Reuters that security officers at Wine's house were assessing threats he could face by going out: "So they might be preventing him in the interest of his own safety."
Soldiers and police were out in force patrolling Kampala on Saturday.