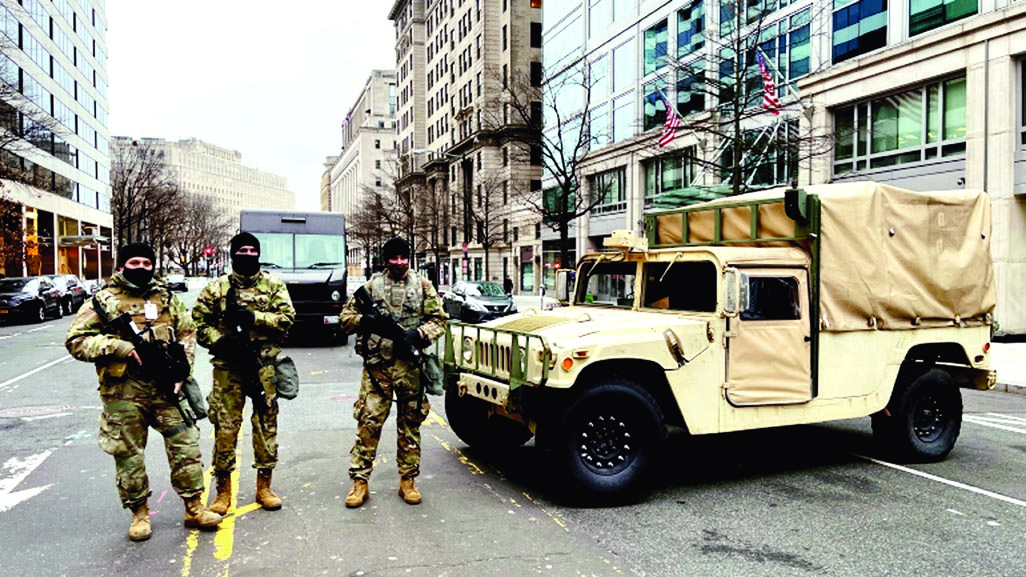 Members of the US National Guard are seen downtown Washington, DC as preparations are made for the inauguration of President-elect Joe Biden as the 46th US President.

Al Jazeera :
Washington, DC - Tall fences topped with thick, spiralling razor wire encased the US Capitol area on Friday, as thousands of heavily armed National Guardsmen stood watch. Bridges leading into the city will be closed beginning this weekend. Access to the grounds will be highly restricted.
In many ways, the lead-up to the inauguration of President-elect Joe Biden more resembles the visit of a head of state to a military encampment in a warzone than it does
the swearing-in of the president of the United States at the building housing the nation's legislature.
The swearing-in of the 46th president will lack not just the pomp and pageantry of years past, but also the symbolic openness characteristic of the peaceful transfer of power in what is perhaps the world's proudest democracy.
This year's festivities will differ in three key and unprecedented ways, according to experts: First, the city is locked down in anticipation of more violence after the attack on the Capitol building last week by armed supporters of President Donald Trump.
Second, Trump has refused to attend the ceremony, still smarting from his loss and insisting the election was stolen.
Third, the inauguration festivities will be broadly downsized to prevent the spread of COVID-19, as the country still struggles to contain the deadly pandemic.
Chuck Hagel, who served as President Barack Obama's secretary of defense and as a Republican US senator before that, said this will be the most significantly secured inauguration since President Abraham Lincoln's swearing-ins in 1861 and 1865, just before and during the Civil War.
Although Trump and Obama also faced credible threats and protests on the days of their inauguration, Hagel said this level of militarisation of Washington, DC, is unheard of, and disheartening, even if it's necessary given the fallout from the insurrection at the Capitol last week. It is likely to reflect badly not just at home, but also abroad, he said.
Â "It's a sad day for America," Hagel said in a telephone interview. "When the world sees this and what they saw last week, they'll have really considerable doubt: 'Is America as good as we think they are?'"
"It will be not the symbolism that we normally have always had, a wise country that can transfer power peacefully, and that can democratically function with different points of view," Hagel continued.
"That will hurt not only our image, but the confidence that other countries have in us and the trust they have they have in us, especially our allies, and our friends and our partners."
Indeed, the ways in which this year's inauguration differs from past years in terms of security are too many to list.
The US capital city is already highly fortified several days out from the main event. Throngs of National Guardsmen have been sleeping on the floor of the Capitol building as their compatriots guard fenced roadblocks around the premises alongside large beige military trucks.
Officials have announced that as many as 25,000 of these troops will be available to secure the event, not to mention stepped up forces from the FBI, US Secret Service, Department of Homeland Security, Washington DC Metropolitan Police Department and US Capitol Police.
Essentially all vehicular traffic into and out of downtown Washington, DC, and around the National Mall and the monuments will be shut down through Thursday, including several main bridges that serve as arteries back and forth from northern Virginia across the Potomac River and southern Maryland across the Anacostia River.
In-person attendance will also be sharply restricted. The National Park Service announced Friday they would allow only two "First Amendment Zones" on Pennsylvania Avenue, the road connecting the Capitol to the White House.
Therein, only 100 people in at a time can amass, a far cry from the record estimated nearly two million people cheering on Obama's first inauguration in 2009 or roughly half a million strong pink-hat clad Women's March protesters who took to the streets the day after Trump's inauguration in 2017.