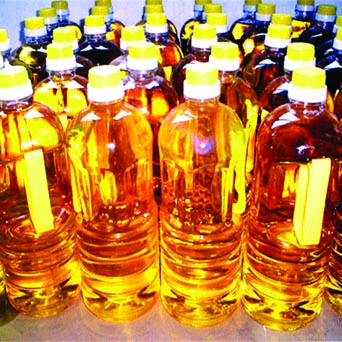 Al Amin :
The abnormal surge in the prices of edible oil in local market has added to the woes of common people amid the ongoing Covid-19 pandemic.
The cooking oil prices are rising due to decreased production in exporting countries and stockpiling by a section of hoarders amid the pandemic.
The surge in the prices of essential commodities like edible oil added worries for the low and middle income-group people of the country as many people have either lost their jobs or facing reduced income due to the deadly pandemic.
Majority people in the informal sector have fallen into financial stress and there is no doubt that they are experiencing hardship in their daily lives.
Loose soybean oil was selling at Tk 120-125 and palm oil at Tk 110-115 per Kg in the local market Saturday. On the other hand, different brand's of bottled oil was selling at Tk 125-130 per litre and Tk 570-600 per jar of five litre.
According to Trading Corporation of Bangladesh (TCB) data, the current prices of soybean oil and palm oil have soared to nine-year-high. The prices are also around 30 per cent higher than those of a year ago, the data showed on Saturday.
Soybean oil price has risen from Tk 3,100 in several phases to Tk 4,200 per maund in the last four months. Similarly, the price of palm oil has also increased from Tk 2,950 to Tk 3,650 per maund, said Mohammed Mustafa Haider, Director of T K Group. Â Â Â  Commerce Ministry, however, said that the ministry has taken initiatives so that no dishonest traders can misuse the situation. Vigilance teams are being prepared to monitor oil markets across the country.
"Surge in edible oil price is normal as the price is increasing in international markets. But we are preparing monitoring teams so that the dishonest traders cannot take chance from the abnormal situation," said Dr Jafar Uddin, Secretary, Commerce Ministry.
Country's five to six private companies import crude edible oil from different countries and sale it in the domestic markets by refining.
"All the refiners have increased oil prices as well as reduced supplies owing to an import crisis and rising prices in the international market," said Rafiqul Islam, a retailer at Jatrabari area in the city.
Most of the country's demand for soybean oil is met through imports from Brazil and Argentina where production has declined due to the pandemic, Biswajit Saha, General Manager of City Group, told the New Nation on Saturday.
"The export-import chains are yet to normalise due to the pandemic situation," he added.
On the other hand, big countries, including China, are stockpiling edible oil amid the potential threat of a second wave of the pandemic, which could once again fuel the hiking of prices, he said.