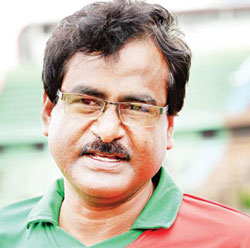 Bangladesh senior men's hockey team head coach Mahbub Harun said he is trying to boost up the players psychologically in the training camp to restore their confidence level ahead of the men's Asian Champions Trophy Hockey scheduled in March.
The training camp already gets underway from January 10 last at the Moulana Bhasani National Hockey Stadium under the supervision of this experienced coach.
"I am emphasizing on players' psychological side in the camp because they are psychologically down due to the long detachment from international events. I am trying to boost them up psychologically during the practice session to restore their confidence level," said hockey coach Mahbub Harun on Tuesday.
Replying to a question Harun said their target is to play good hockey and secure a respectable result from the tournament because all know which teams they will have to deal with in the tournament. All five teams are very strong though they have the previous experience of playing with all the teams, so the coach hoped his boys would give a good fight at the end taking the home ground advantage.
Bangladesh senior team appeared in their last international match in Asian Games Hockey in Indonesia in 2018. The Bangladesh Hockey team finished 6th position after losing to South Korea by 7-0 drubbing in the 5th place-deciding encounter.
The competition was originally scheduled for November last year in Dhaka, but the Asian Hockey Federation (AHF) has rescheduled the biennial event to March 11-19 this year due to the Covid-19 pandemic.
Asked whether the practice matches can be helpful for the team ahead of the big tourney, Harun said he has already discussed with the federation with this issue and asked to arrange some practice matches against China after February 15 so that the team can take a good preparation for the major tournament.
Harun also has been working hard in the camp as well to restore the fitness level of the players, who's fitness level is not up to the mark at the moment due to the prolonged gap.
The gap may hamper the team's performance in the tournament because the senior team did not play any international match for a long time. Not only Bangladesh but all the participating countries did not make team wise practice due to Covid-19 pandemic from March last.
Bangladesh played their last international match in Asian Games. It's a huge gap and it would be very difficult to regain the players' fitness level. There is no way, as the players will have to toil to restore the fitness level.
First held in 2011, this will be the sixth edition of the continental tournament with India having won it three times - in 2011, 2016 and 2018 they were awarded the title jointly with Pakistan.
Bangladesh will host the sixth edition of Men's Asian Champions Trophy, the elite hockey competition of the continent featuring India, Pakistan, South Korea, Japan, Malaysia and host Bangladesh with the top four in the round-robin progressing to the semi-finals.
Bangladesh will start their tournament campaign taking on Malaysia in their opening match on March 11. The host will then face India, Japan, South Korea and Pakistan on March 12, 13, 15 and 16 respectively.