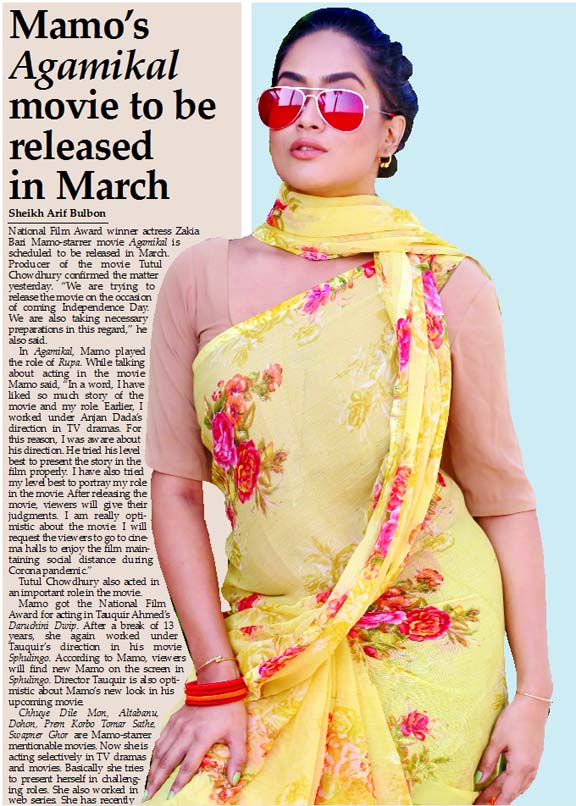 Sheikh Arif Bulbon :
National Film Award winner actress Zakia Bari Mamo-starrer movie Agamikal is scheduled to be released in March. Producer of the movie Tutul Chowdhury confirmed the matter yesterday. âWe are trying to release the movie on the occasion of coming Independence Day. We are also taking necessary preparations in this regard,â he also said.
In Agamikal, Mamo played the role of Rupa. While talking about acting in the movie Mamo said, âIn a word, I have liked so much story of the movie and my role. Earlier, I worked under Anjan Dadaâs direction in TV dramas. For this reason, I was aware about his direction. He tried his level best to present the story in the film properly. I have also tried my level best to portray my role in the movie. After releasing the movie, viewers will give their judgments. I am really optimistic about the movie. I will request the viewers to go to cinema halls to enjoy the film maintaining social distance during Corona pandemic.â
Tutul Chowdhury also acted in an important role in the movie.
Mamo got the National Film Award for acting in Tauquir Ahmedâs Daruchini Dwip. After a break of 13 years, she again worked under Tauquirâs direction in his movie Sphulingo. According to Mamo, viewers will find new Mamo on the screen in Sphulingo. Director Tauquir is also optimistic about Mamoâs new look in his upcoming movie.
Chhuye Dile Mon, Altabanu, Dohon, Prem Korbo Tomar Sathe, Swapner Ghor are Mamo-starrer mentionable movies. Now she is acting selectively in TV dramas and movies. Basically she tries to present herself in challenging roles. She also worked in web series. She has recently finished shooting of a web series under Krishnenduâs direction, Mamo also said.Â