Shakib returns to his form 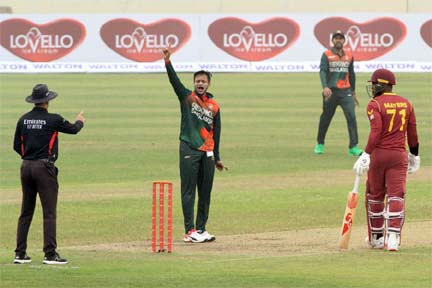 Sports Reporter :
Ace all-rounder Shakib Al Hasan returned to his form. Shakib bowled a superb spell against West Indies at the Sher-e-Bangla National Cricket Stadium in the city's Mirpur on Wednesday. He finished as 7.2-2-8-4. He was adjudged the Man of the Match for his outstanding bowling performance.
Shakib claimed four wickets at the cost of eight runs. He captured his 150th ODI wicket at home ground when he bowled out Andre McCarthy for 12 runs.
Shakib Al Hasan returned to the international cricket after 16-month. He was banned by International Cricket Council (ICC) for failed to disclose corrupt approach to the authority. Besides, Bangladesh returned to the international cricket after 10 months due to coronavirus pandemic.
Shakib played his last ODI match against on September 21, 2019. He played against Afghanistan in a Twenty20 International match and dismissed Mohammad Nabi, who was trapped leg before wicket by Shakib.
Shakib said, " I feel good. It is not easy to perform well after 16-month gap. I am satisfied with my performance. We were out of cricket almost 10 months. Everybody was eager to play an international match. We were nervous from the beginning and we were excited."
He said, " There are some good bowlers in our pipeline. Hasan Mahmud and I played in the Bangabandhu T20 Cup Cricket for Gemcon Khulna. I am glad after watching his superb bowling."