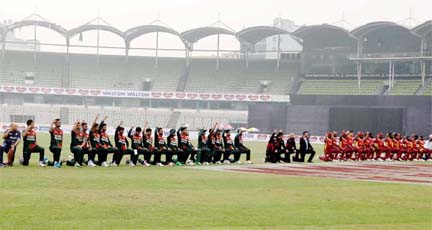 UNB, Dhaka :
On the eve of the first match of Bangabandhu Bangladesh vs West Indies Cricket Series, Bangladesh and West Indies cricket teams showed solidarity withÂ  Balck Lives Matter (BLM) movement, a decentralized political and social movement.
Â Along with the Tigers, the West Indies cricket team also joined the cause as all of them kneeled down and raised one hand to show their solidarity with the movement- Black Lives Matter.
The Black Lives Matter movement erupted last year after a policeman killed an unarmed black man, George Floyd, at Charlotte in North Carolina of the United States last year. Right after this incident, the movement spread throughout the world. The movement was also addressed as George Floyd protests.
Â The movement was initiated first time in 2013 when three women started the movement after the acquittal Gorge Zimmerman, who shot dead unarmed black teenager Trayvon Martin.
Â During West Indies' England tour in June-July last year, they kneeled down to show solidarity with the movement. Hosts England also joined the cause.
Bangladesh are taking on the West Indies in three ODIs and two Tests. The first ODI is taking place in Mirpur on January 20 while the second match will also be played at the same venue on January 22. The third ODI and first Test will take place in Chattogram on January 25 and February 3, and the final match of the series, the second Test, will be played in Mirpur from February 11.