1,056 landless families to get house in Naogaon 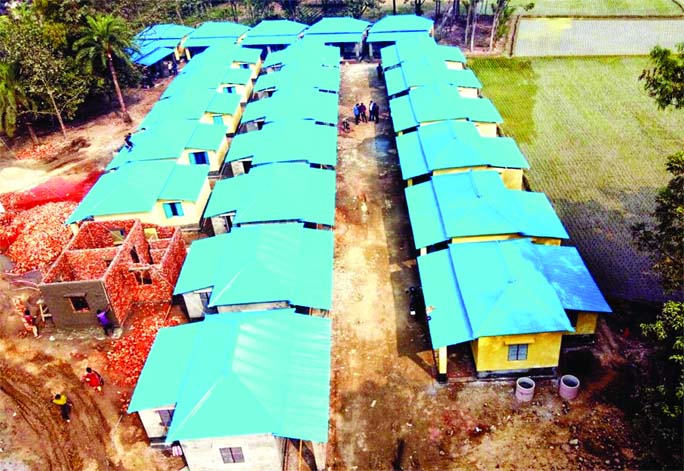 Our Correspondent :
A total of 1,056 landless and homeless families in 11 upazilas of Naogaon district are going to get semi-pucca houses as a gift from Prime Minister Sheikh Hasina on the occasion of the 'Mujib Borsho'.
Landless families are egerly waiting to get the houses built in rows of red and azure blue canopies.
About 98 percent of the 1,056 houses constructed in the district have already been completed.
Preparations are in the final stage for handing over the houses under the constant supervision of the district and upazila administrations.
Naogaon Sadar Upazila Project Implementation Officer (PIO) said Mahbubur Rahman said, there is an allocation of Tk 1.71 lakh for each of these under construction houses The houses have two rooms, a toilet, a kitchen and an open front porch.
"We have tried to discharge our responsibilities with the utmost sincerity by involving the local government representatives in this work," he added.
On January 23, the homeless and landless people will get the houses.
In this regard, Naogaon District Relief and Rehabilitation Officer (DRO) Kamrul Ahsan said, this grant of the Prime Minister will bring back immense happiness and peace in the lives of the helpless people of this country.
He said the homeless will get houses in the same way in the second phase. There are 8000 homeless families in Naogaon. Of these, 1,056 families got in the first phase.
Naogaon DC Haroon Harun Ur Rashid said those who are uprooted, those who have no place, no place to hide their heads. Considering their words with tenderness, our Prime Minister is building houses for these homeless people all over the country.