Bangladesh looking for more sources to get coronavirus vaccines 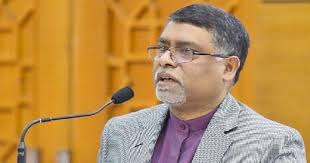 The government is sounding out other companies to immunise its 170 million-strong population after securing 30 million doses of the Oxford University-AstraZeneca coronavirus vaccine.
Bangladesh needs 340 million doses of vaccines â two shots per head -- to vaccinate its population.
Bangladesh will get five million doses of the University of Oxford-AstraZeneca vaccine a month from the Serum Institute of India, with the first consignment expected next week.
The government is also looking to securing doses of the Pfizer-BioNTech vaccine under the COVAX programme led by the World Health Organization and global alliance GAVI.
Bangladesh has written to the COVAX for the unspecified amount of doses, but it does not have the infrastructure to store and transport the Pfizer vaccine that requires storage at a temperature of -70 degrees Celsius .
GAVI is expected to provide the country with around 68 million doses of coronavirus vaccine to inoculate 20 percent of the population.
Health Minister Zahid Maleque points out that no single company can supply so many doses quickly because of the high demand all over the world.Â
So, he says, the government is working to bring more doses from other companies at the soonest. It is trying to buy the doses from Russia, Moderna of the US and Franceâs Sanofi.
Indiaâs Bharat Biotech and Chinaâs Anhui Zhifei Longcom Biopharmaceutical are interested in trialling their vaccine candidates in Bangladesh.
According to Maleque, the two companies may get clearance from the relevant authorities to run clinical trials by conforming to the rules.
Anhui Zhifei has worked with the Chinese government and Prime Minister Sheikh Hasina is aware of their proposal, he says. âThey can conduct the trials after completing the process for the approval."
The government, adds the health minister, is in touch with the countries that want, or have the ability, to provide Bangladesh with vaccines, .
âWe donât want to get stuck with only one company. Weâve talked to Moderna and Sanofi as well. They havenât said anything yet.
âWeâve talked to Russia more than once," reveals Maleque. "We'll consider approving their vaccine if they apply with proper documents. We'll also take the vaccine if it follows the protocol. But Russia hasnât applied yet."
ANHUI ZHIFEI INTERESTS IN TRIAL,
Anhui Zhifei applied for the trial at the health ministry on Dec 10 last year and the ministry forwarded the application to the Directorate General of Health Services.
ABM Khurshid Alam, director general of health services, said the DGHS wrote to the Chinese company seeking more details in the first week of January.
The DGHS wants to know when it can start the trials, whether it has conducted trials anywhere else, how many doses it can give Bangladesh after the trials, whether it is ready to share the technology to produce the vaccine, how long it will take for the trialÂ  to end, and how many volunteers it will need for the trials.
Anhui Zhifei has signed a Memorandum of Understanding with the Bangabandhu Sheikh Mujib Medical University to appoint the institution as the companyâs Clinical Research Organisation in Bangladesh.
âWe want them to conduct the trials. They will get necessary assistance for the trials,â said Khurshid.
Zhifei had conducted first-phase trials of its vaccine candidate in June, second phase in July and began the third phase on 29,000 people in several countries in November last year.
Its candidate vaccine uses engineered subunits of the coronavirus spike protein to provoke an immune response.
Khurshid said Bharat Biotech has not applied for clinical trials and he is not aware of details of correspondence with the Indian firm.
Chinaâs Sinovac had wanted to conduct clinical trials of its vaccine in Bangladesh, but the government later turned down its demand for funds.
The health minister said the door is still open for Sinovac, but the government has not heard from the company after refusing its co-financing proposal.
âThey (Sinovac) had first told us that they would conduct the trials for free. Then they demanded money. Should we pay after giving the approval for trials? I donât know if this happens anywhere else in the world,â said Maleque.
Sinovacâs candidate CoronaVac is one of the six COVID-19 vaccines that have been approved by several countries for emergency use.
Mushtuq Husain, a member of the committee on COVID-19 vaccine distribution and preparations, said the government needs to be careful to avoid a debacle like the one related to Sinovac while dealing with Anhui Zhifei.
He said Sinovac sought the funds from Bangladesh because the company had already conducted the trials on sufficient numbers of people.
Anhui Zhifei has also completed the first and second phases, and began the third phase in a certain country, he said.
âIf they can meet the target of trials on 29,000 people before getting Bangladeshâs approval, we will lose the chance to have the trials held here,â the public health expert said.
Source: bdnews24.comÂ