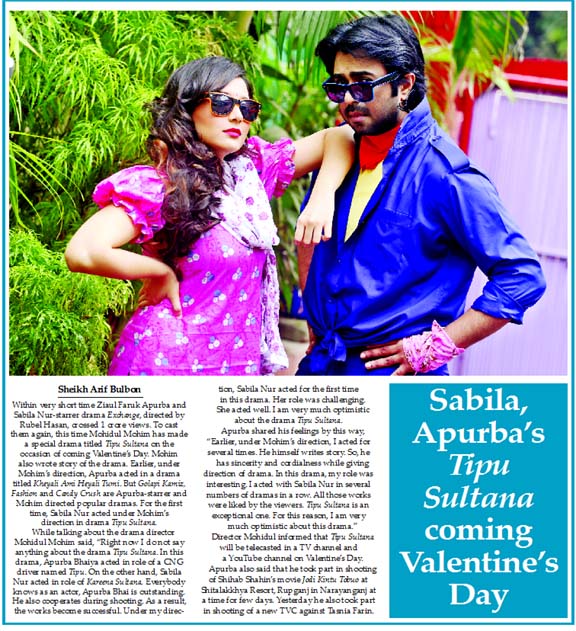 Sheikh Arif Bulbon :
Within very short time Ziaul Faruk Apurba and Sabila Nur-starrer drama Exchange, directed by Rubel Hasan, crossed 1 crore views. To cast them again, this time Mohidul Mohim has made a special drama titled Tipu Sultana on the
occasion of coming Valentineâs Day. Mohim
also wrote story of the drama. Earlier, under Mohimâs direction, Apurba acted in a drama titled Kheyali Ami Heyali Tumi. But Golapi Kamiz, Fashion and Candy Crush are Apurba-starrer and Mohim directed popular dramas. For the first time, Sabila Nur acted under Mohimâs
direction in drama Tipu Sultana.
While talking about the drama director Mohidul Mohim said, âRight now I do not say anything about the drama Tipu Sultana. In this drama, Apurba Bhaiya acted in role of a CNG driver named Tipu. On the other hand, Sabila Nur acted in role of Kareena Sultana. Everybody knows as an actor, Apurba Bhai is outstanding. He also cooperates during shooting. As a result, the works become successful. Under my direction, Sabila Nur acted for the first time
in this drama. Her role was challenging.
She acted well. I am very much optimistic about the drama Tipu Sultana.
Apurba shared his feelings by this way, âEarlier, under Mohimâs direction, I acted for several times. He himself writes story. So, he
has sincerity and cordialness while giving direction of drama. In this drama, my role was interesting. I acted with Sabila Nur in several numbers of dramas in a row. All those works were liked by the viewers. Tipu Sultana is an exceptional one. For this reason, I am very
much optimistic about this drama.â
Director Mohidul informed that Tipu Sultana will be telecasted in a TV channel and
a YouTube channel on Valentineâs Day.
Apurba also said that he took part in shooting of Shihab Shahinâs movie Jodi Kintu Tobuo at Shitalakkhya Resort, Rupganj in Narayanganj at a time for few days. Yesterday he also took part in shooting of a new TVC against Tasnia Farin.