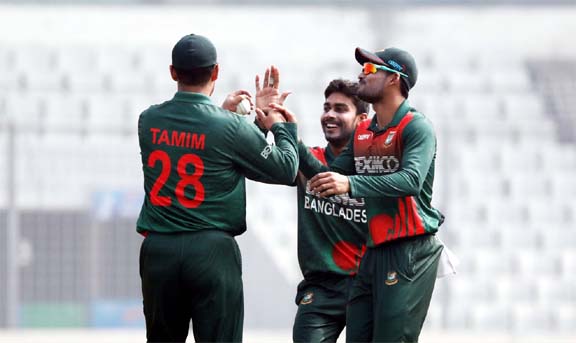 BSS, DhakaÂ  :
Bangladesh off-spinner Mehidy Hasan Miraz expressed his gratitude to Shakib Al Hasan and spin bowling coach Sohel Islam as he claimed for 4-25 in the second ODI against West Indies on Friday to record his career-best bowling.
He surpassed his previous best 4-29, that also came against West Indie sin 2018.
Mehidy said after the first ODI in which he went wicket-less after delivering seven overs, he talked to Shakib Al Hasan and spin bowling coach to make a turnaround.
Sohel Islam took the responsibility of Bangladesh's spin bowling department in interim basis after Daniel Vettori was unable to join the side due to Covid-19 issue back in his country in New Zealand.
"I'm really happy, because I wasn't happy with the areas I bowled in the first match," he told the broadcaster after the first innings of the match.
"I spoke to senior players like Shakib and got some inputs from our spin bowling coach as well," he added.
Alongside Mehidy, Shakib himself and pacer Mustafizur also dazzled with two wickets apiece as West Indies was skittled out for 148 runs in 43.4 overs.
Their combined effort helped Bangladesh to bowl any opponents out for below 150 runs for the first time in their cricket history. In the first match, Bangladesh dismissed West Indies for 122 runs and thereafter secured a six-wicket victory to lead the series 1-0.
Bangladesh indeed was set to bowl West Indies out below 100 after the visitors were slumped to 71-7. But Rovman Powell who scored 41 off 66, hitting two fours and one six resisted and took the closer to 148.
Powell became more threatening at one phase as West Indies looked set to take the scorer closer to 200 on a difficult pitch.
However, Mehidy finally could dismiss Powell to dash West Indies' hope
"I saw [Rovman] coming and the wicketkeeper, captain and Shakib bhai also told me that he was going to look to come forward. The idea was not to concede a six," Mehidy explained the plan set for Powell.