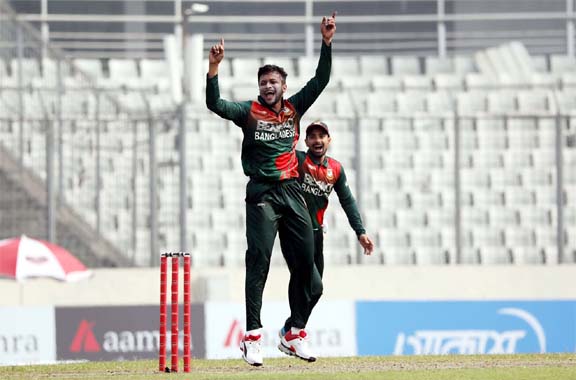 Sports Reporter :
Ace all-rounder Shakib Al Hasan of Bangladesh became the first cricketer who scored more than 2500 runs and also picked up 100 wickets at a single venue -- the Sher-e-Bangla National Cricket Stadium (SBNCS) in Mirpur. He made the record against West Indies in the second ODI at the SBNCS on Friday.
He played 82 ODI matches to post the record. Shakib achieved the feat when he struck West Indies medium-pacer Raymon Reifer for a boundary towards the backward point during the second ODI against the Caribbean side on Friday. Shakib had already pluckedÂ  119 wickets at the SBNCS and is just second to Wasim Akram, who led the chart for most wickets in a single venue with 122 wickets in 77 matches at the Sharjah Cricket Stadium in United Arab Emirates.
Shakib, who remained unbeaten on 43 as Bangladesh chased West Indies' 148 in the second ODI, crossed 2500 runs land-mark at the SBNCS with two hundreds and 21 fifties. The premier all-rounder is also third on the list of players with most runs in a single venue while Tamim Iqbal led the chart with 2713 runs in 80 matches, including five hundreds and 18 fifties at the SBNCS.