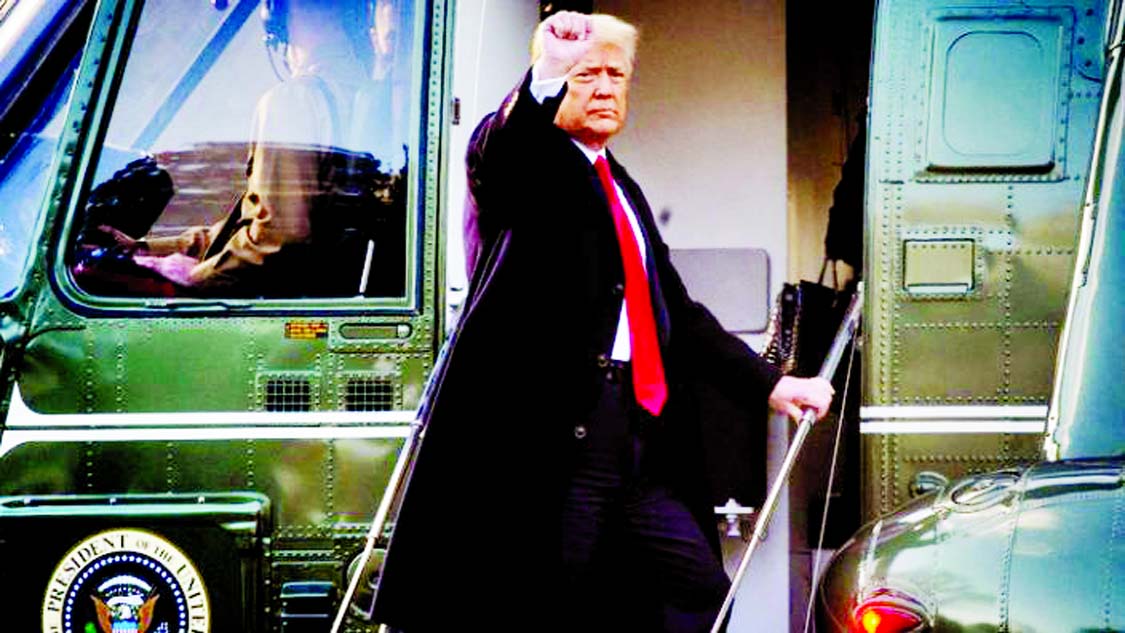 News Desk :
Republicans in the US Senate are asking Democrats to delay the start of former President Donald Trump's impeachment trial until February.
They argue that this will giveÂ  Trump time to prepare a defence.
The House of Representatives last week charged Trump with inciting a deadly riot at the US Capitol, paving the way for a Senate trial. If convicted, he could be barred from future office.
Top Senate Democrat Chuck Schumer is reviewing the Republicans' request, report agencies.
Some Democrats back a delay, saying it will give the Senate more time to confirm cabinet nominees, but others say a speedy trial is necessary to allow the country to move on.
Mr Trump flew to Florida as his term ended on Wednesday, skipping his successor Joe Biden's inauguration.
Mr Trump's actions ahead of the 6 January riot are at the heart of the case. The then president told protesters near the White House to "peacefully and patriotically" make their voices heard as they prepared to march towards the US Capitol building. He also told them to "fight like hell".
The demonstration turned ugly as a mob forced its way into the congressional complex where lawmakers
were certifying Mr Biden's election victory.
Four protesters and a Capitol Police officer died in the mayhem.
A week later, Mr Trump became the first US president to be impeached twice.
His trial in the Senate will be the only one ever to have taken place after a president has left office.
On a call to his fellow Republican senators on Thursday, Senate minority leader Mitch McConnell said he had asked House Democrats to hold off sending the single impeachment article to the Senate until 28 January - the move that would kick-start the trial's first phase.
Under this timetable, Mr Trump would then have two weeks - until 11 February - to submit his pre-trial defence. Arguments would be expected to begin in mid-February.
Republicans, who as of Wednesday no longer control the Senate, need the new Democratic majority leader, Mr Schumer, to agree to the idea.
MrÂ  McConnell said in a statement: "Senate Republicans are strongly united behind the principle that the institution of the Senate, the office of the presidency, and former President Trump himself all deserve a full and fair process that respects his rights and the serious factual, legal, and constitutional questions at stake."
Senator John Cornyn of Texas told Reuters that he and fellow Republicans had been discussing the need to allow Mr Trump "due process".
Ten House Republicans sided with Democrats in impeaching the outgoing president on 14 January.
Even though Democrats now narrowly control the Senate, they would need the support of at least 17 Republicans in order to convict Mr Trump, because a two-thirds vote is required.
A handful of Senate Republicans have indicated they are open to conviction, but most have either cast doubt on the legality of trying a president after he has left office, or said the process would be too divisive.
Mitch McConnell's proposal to delay the trial seems destined to split the Democrats. And that's probably exactly why the wily Senate minority leader suggested it.
Some on the left will welcome a two-week postponement, as it will give the Senate time to confirm presidential appointments and begin work on their legislative agenda. Before his inauguration, Joe Biden expressed concern about being unable to quickly staff his administration and recommended the Senate try to conduct a part-time trial while doing other business.
Other Democrats prefer a speedy trial. They believe that delays will reduce the pressure on Republicans to vote to convict, as the violence of 6 January recedes from memory. The sooner Mr Trump is held accountable, in their mind, the better.
Mr McConnell's move is also a bid to steal the initiative. At the moment, according to Senate rules, a trial has to commence as soon as House Speaker Nancy Pelosi transmits the articles of impeachment to the Senate. She's the only one who can light the fuse on this political bomb.
Even though Mr McConnell no longer runs the Senate, he's showing he still has some tricks up his sleeve.
A spokesman for Chuck Schumer said he would discuss the matter with Mr McConnell.
Speaker Pelosi has the ultimate power over the timing. She declined to answer journalists' questions on Thursday about when she would submit the charge.
But she said Mr Trump did not deserve a "get out of jail card" just because he had left office.