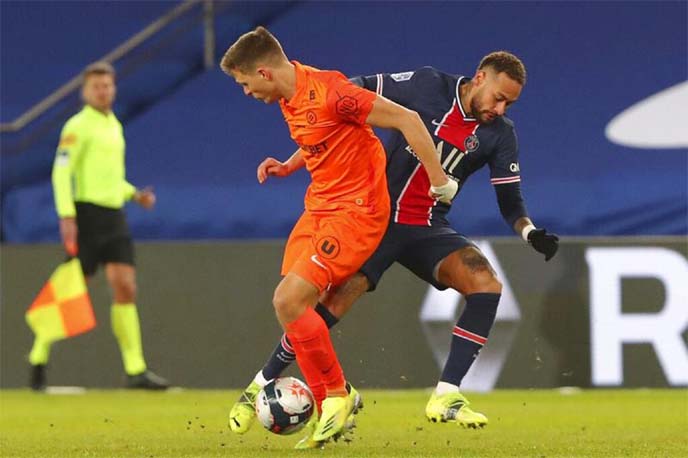 PSG\'s Neymar (right) fights for the ball with Montpellier\'s Arnaud Souquet during the French Ligue 1 soccer match at the Parc des Princes stadium in Paris, France on Friday.

Agency :
Paris Saint-Germain scored three goals in a four-minute blitz in the second half as they demolished 10-man Montpellier 4-0 on Friday to go three points clear at the top of Ligue 1.
Kylian Mbappe bagged a double for his first goals of the year with Neymar and Mauro Icardi also finding the back of the net after Montpellier keeper Jonas Omlin was sent off early in the opening half.
The win put PSG, who welcomed coach Mauricio Pochettino back on the bench after he was forced to spend a week in isolation following a positive Covid-19 test, on 45 points from 21 games.
Montpellier are 11th on 28 points.
At the Parc des Princes, Omlin was sent off after only 19 minutes for bringing down Mbappe just outside the box.
PSG capitalized on their numerical advantage 11 minutes before the interval as Mbappe chipped the ball past Dimitry Bertaud after being set up by Angel Di Maria.
Neymar doubled the tally on the hour with a crossed shot from Mbappe's pass. A minute later Icardi made it 3-0 from point-blank range from Alessandro Florenzi's cross.
Icardi then slipped the ball to Mbappe at the end of a counter attack for the French forward to add to Montpellier's woes.
Pochettino said he was relieved to be back on the side of the pitch.
"I feel good, I happy to be here in front of you," the Argentine said at a news conference.
"It was a good game. Today we picked that combination (Mbappe, Neymar, Di Maria, Icardi). We'll see in the future if we stick to it."