Hundreds detained in protests across Russia 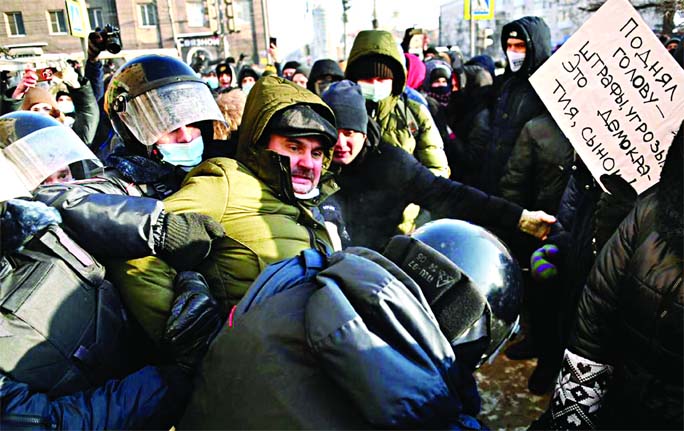 Law enforcement officers restrain a protester during a rally in support of jailed Russian opposition leader Alexei Navalny in Omsk, Russia on Saturday.

BBC Online :
Hundreds of people have been detained as police try to stop nationwide protests in Russia in support of jailed opposition politician Alexei Navalny.
Officers have been breaking up groups of protesters in the capital Moscow, where a demonstration is under way.
Thousands of people have already taken part in rallies in Russia's Far East, where there were also arrests.
Mr Navalny, President Vladimir Putin's most high-profile critic, called for protests after his arrest last weekend.
He was detained on 17 January after he flew back to Moscow from Berlin, where he had been recovering from a near-fatal nerve agent attack in Russia last August.
On his return, he was immediately taken into custody and found guilty of violating parole conditions. He says it is a trumped-up case designed to silence him, and called on his supporters to protest.
Several of Mr Navalny's close aides, including a spokeswoman, have also been detained in the run up to Saturday's protests. Prior to the rallies, Russian authorities had promised a tough crackdown, with police saying any unauthorised demonstrations and provocations would be
"immediately suppressed".
Thousands are currently attending a protest in Moscow's central Pushkin Square, where police have erected metal barriers to deter protesters.
Protesters have been chanting "Putin is a thief!" and "disgrace" as police break up their groups.
Russia's interior ministry said 4,000 had turned up in Moscow, but opposition sources say it may be as high as 15,000.
One witness told Reuters at least 100 people may have been detained there already.
OVD Info, an independent NGO that monitors rallies, said that more than 300 people had been detained so far in 30 cities across the country.
Russia's Far East saw some of the first protests on Saturday, with people braving the extreme cold in a show of support for Mr Navalny.
Attendees at a small protest in the Siberian city of Yakutsk saw temperatures dip as low as -50C (-58F).
One independent news source, Sota, said at least 3,000 people had joined a demonstration in the city of Vladivostok but local authorities there put the figure at 500.
AFP footage showed riot police in Vladivostok running into a crowd, and beating some of the protesters with batons.
Meanwhile, there were reports of disruption to mobile phone and internet coverage in Russia on Saturday - though it is not known if this is related to the protests.
The social media app TikTok had been flooded with videos promoting the demonstrations and sharing viral messages about Mr Navalny.
In response, Russia's official media watchdog, Roskomnadzor, demanded that TikTok take down any information "encouraging minors to act illegally", threatening large fines.
Russia's education ministry has also told parents not to allow their children to attend any demonstrations.
Several of Mr Navalny's key aides were taken into police custody in the days leading up to Saturday's protests, including his spokeswoman, Kira Yarmysh, and one of his lawyers, Lyubov Sobol. They face fines or short jail terms.
Ms Sobol has since been released, but Ms Yarmysh has now been jailed for nine days.
Prominent Navalny activists are also being held in the cities of Vladivostok, Novosibirsk and Krasnodar.
In a push to gain support ahead of the protests, Mr Navalny's team released a video about a luxury Black Sea resort that they allege belongs to President Putin - an accusation denied by the Kremlin.
For a long time the Russian authorities made out that Alexei Navalny was irrelevant. Just a blogger. With a tiny following. No threat whatsoever.
Recent events suggest the opposite. First Mr Navalny was targeted with a nerve agent, allegedly by a secret group of FSB state security hitmen. Instead of investigating the poisoning, Russia is investigating him: on his return from Germany the Kremlin critic was arrested.
Having put Mr Navalny behind bars, the authorities are putting pressure on his supporters. The Kremlin's greatest fear is of a Ukraine-style revolution in Russia that would sweep away those in power.
There's no indication that such a scenario is imminent. But with economic problems growing, the Kremlin will worry that Mr Navalny could act as a lightning rod for protest sentiment. That explains the police crackdown on Navalny allies ahead of Saturday's potential protests.
Plus, this is getting personal. Mr Navalny's video about "Putin's Palace" on the Black Sea was designed to cause maximum embarrassment to the Russian president.