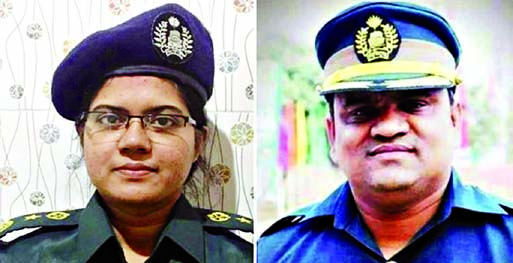 Staff Reporter :
The authorities have withdrawn two top officials of Kashimpur Central Jail for reportedly providing special treatment to the Hallmark Group's GM Tushar Ahmed in spending time with a female inside the jail in violation of the prison manual.
The withdrawn officials are Kashimpur Central Jail Part-1 Senior Jail Super Ratna Roy and Jailer Nur Mohammad Mridha.
Additional Inspector General of Prison Colonel Abrar Hossain confirmed the matter to the New Nation over cell phone on Sunday.
Earlier, Deputy Jailer Md Golam Saqlain, Sergeant Instructor Md Abdul Bari and Assistant Chief Jailer Md Khalilur Rahman were withdrawn. A total of five officials were withdrawn regarding the matter and have been attached to headquarters.
"We are taking such initiatives for the sake of justice," said Colonel Md Abrar Hossain.Â
Meanwhile, a media report said that the senior jail super Ratna Roy submitted a report to the Inspector General of Prison mentioning that to get a chance to spend time with a female, Hallmark General Manager (GM) Tushar Ahmed bribed two officials and few employees of Kashimpur Jail-1.
Tushar paid Tk one lakh to the jailer, Tk 25,000 to deputy jailer and Tk 5,000 to sergeant instructor and chief assistant jail guard. There she did not mention her involvement. She said in the report that the jailer did it without informing her, the media report.
Jail and different sources said that the female is the second wife of Hallmark General Manager (GM) Tushar Ahmed who spent time in the Kashimpur Central Jail-1 in Gazipur, a CCTV footage captured on 6 January.
A private TV channel exposed the CCTV footage in a report causing a stir across the country.
The CCTV footage shows GM Tushar Ahmed walking around the officers' cabin area in the prison wearing a black shirt.
Â After a few moments, a female in a purple coloured three-piece suit entered the jail from outside. Senior Jail Super Ratna Roy and Deputy Jailer Golam Saqlain were present at that time.
At 12:55 pm, the woman went to the prison's official room with two young men. Jailor Saqlain greeted the woman then left the room. Tushar was then taken to the room ten minutes later.
After that Tushar and the woman went to the Jail Super Ratna's room. Both of them were laughing and joking while leaving her at Ratna's room. Two minutes later, they returned to Saqlain's room and spent one and half hours there.