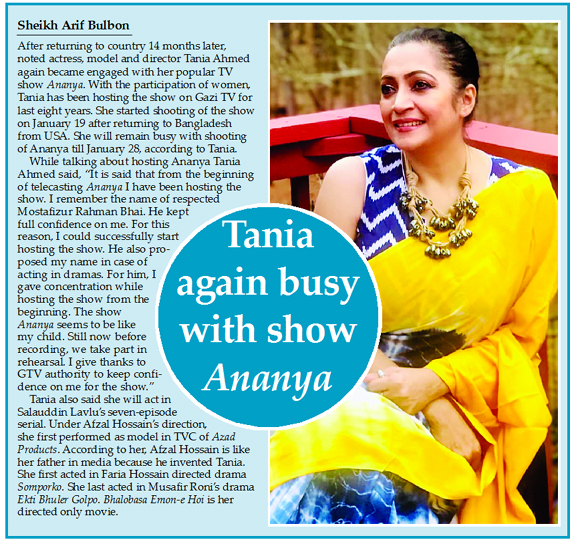 Sheikh Arif Bulbon :
After returning to country 14 months later, noted actress, model and director Tania Ahmed again became engaged with her popular TV show Ananya. With the participation of women, Tania has been hosting the show on Gazi TV for last eight years. She started shooting of the show on January 19 after returning to Bangladesh from USA. She will remain busy with shooting of Ananya till January 28, according to Tania.
While talking about hosting Ananya Tania Ahmed said, âIt is said that from the beginning of telecasting Ananya I have been hosting the show. I remember the name of respected Mostafizur Rahman Bhai. He kept full confidence on me. For this reason, I could successfully start hosting the show. He also proposed my name in case of acting in dramas. For him, I gave concentration while hosting the show from the beginning. The show Ananya seems to be like my child. Still now before recording, we take part in rehearsal. I give thanks to GTV authority to keep confidence on me for the show.â
Tania also said she will act in Salauddin Lavluâs seven-episode serial. Under Afzal Hossainâs direction, she first performed as model in TVC of Azad Products. According to her, Afzal Hossain is like her father in media because he invented Tania. She first acted in Faria Hossain directed drama Somporko. She last acted in Musafir Roniâs drama Ekti Bhuler Golpo. Bhalobasa Emon-e Hoi is her directed only movie.Â