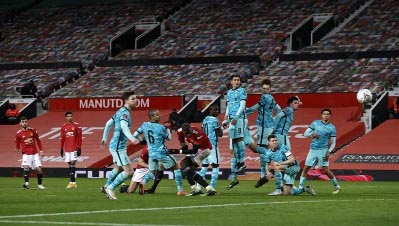 AFP, London :
Bruno Fernandes' superb free-kick sent troubled Liverpool crashing out of the FA Cup as Manchester United beat their bitter rivals 3-2 in the fourth round, while Tammy Abraham's hat-trick eased the pressure on Chelsea manager Frank Lampard in a win over Luton on Sunday.
Fernandes struck with 12 minutes left at Old Trafford to cap a thrilling clash that left Liverpool searching for answers after another painful defeat.
Jurgen Klopp's side took the lead through Mohamed Salah's first-half goal, but Mason Greenwood equalised before the interval.
Marcus Rashford put United in front after the break and, although Salah equalised, Portugal midfielder Fernandes came off the bench to fire his free-kick past Alisson Becker.
After slumping to fourth in the Premier League following Thursday's shock 1-0 defeat against Burnley - their first league loss at Anfield since 2017 - Liverpool have to lick their wounds again.
The English champions, who trail leaders United by six points, have won only one of their last seven games in all competitions and that lone success came against Aston Villa's youth team in the FA Cup third round.
Liverpool struck in the 18th minute when Roberto Firmino threaded a pass to Salah, who lifted his shot over Dean Henderson.
United levelled in the 26th minute when Rashford sent Greenwood clear for a low strike past Alisson Becker.
Ole Gunnar Solskjaer's men netted again in the 48th minute as a mistake from Liverpool's young defender Rhys Williams allowed Greenwood to race clear and score.
Firmino's cross was converted by Salah for Liverpool's 58th-minute equaliser, but Fernandes won it with his sublime set-piece after Fabinho fouled Edinson Cavani.
United will host West Ham in the fifth round as their momentum continues to build.
"You know when you go a goal down the reaction of everyone was really good. We played some really good stuff, good goals. We have to defend well against them and we managed to react well," Solskjaer said.
Liverpool have never got past the fifth round in Klopp's reign, but that will be the least of his concerns as he tries to spark a revival from his spluttering team.
"There was a lot of good things and some mistakes around the goals. If you want to win here you have to be absolutely top and we were not," Klopp said.
Lampard has been under the spotlight, but there was some relief for the Blues boss as Abraham's finishing helped seal a 3-1 victory against Luton.
The England striker struck twice in the opening 17 minutes, first firing into the far corner before heading home from close range for his 10th goal of the season.
However, it was not all plain sailing for Lampard's men as goalkeeper Kepa Arrizabalaga was at fault for another sloppy goal, while Timo Werner's lack of confidence will not have been helped by missing a penalty.
Jordan Clark's low shot crept past Kepa's woeful attempted save to give Luton a lifeline and the world's most expensive 'keeper had to make a much more difficult stop to deny Harry Cornick an equaliser in the second half.
A brilliant team move finally killed the tie off 16 minutes from time as substitute Callum Hudson-Odoi crossed for Abraham to tap home from point-blank range.
Werner had a chance to score just his second goal in 16 games when he was tripped by Clark, but his dreadful spell continued as his tame penalty was saved by Simon Sluga.
A trip to Barnsley in the fifth round awaits early next month in what is likely to be Chelsea's best chance of a trophy this season.
Leicester and Everton were also successful over Championship opposition to maintain their fine form.
The Foxes came from behind to beat Brentford 3-1 to set up a home tie against Brighton.
Dominic Calvert-Lewin struck on his return from injury as Everton saw off Sheffield Wednesday 3-0. Carlo Ancelotti's men will face the winners of Tottenham's trip to Wycombe on Monday.
Burnley beat Fulham 3-0 at Craven Cottage and play Bournemouth or Crawley in the last 16.