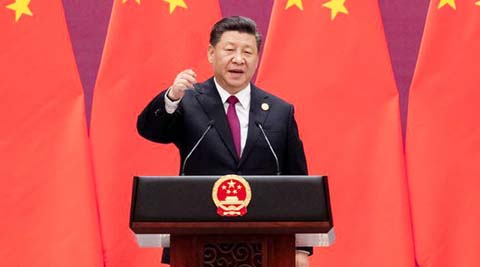 AFP, Beijing :
Chinese President Xi Jinping yesterday warned global leaders at an all-virtual Davos forum against starting a "new Cold War", and urged global unity in the face of the coronavirus pandemic.
Having largely curbed the spread of the pandemic within its borders, Xi wants to position China as a key player in a new multilateral world order as the US remains crippled by the pandemic.
"To build small cliques or start a new Cold War, to reject, threaten or intimidate others... will only push the world into division," said Xi in a likely veiled attack on US President Joe Biden's plans to revitalise global alliances to counter China's growing influence.
In a swipe at moves targeting China launched by the previous US administration under President Donald Trump, Xi said confrontation "will always end up harming every nation's interests and sacrificing people's welfare". The Chinese leader also reaffirmed Beijing's ambitious climate pledges to slash carbon emissions by 65 percent by 2030 and achieve carbon neutrality by 2060.
"Meeting these targets will require tremendous hard work from China. But we believe that when the interests of the entire humanity are at stake, China must step forward, take action and get the job done," he said.