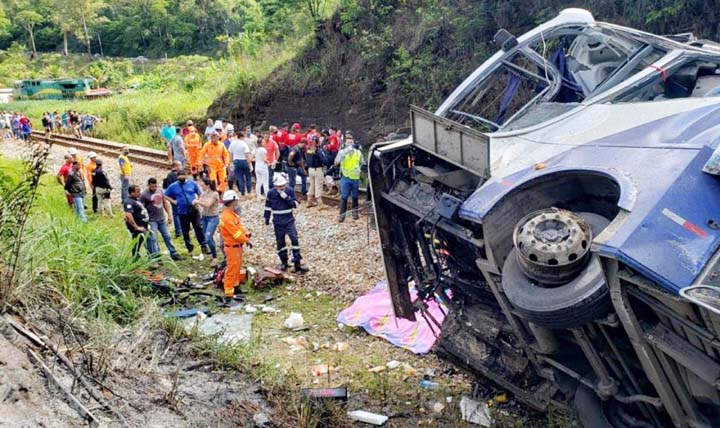 Handout picture released by the Minas Gerais Fire Department showing a bus that fell from a bridge in Joao Monlevade recently.

The Rio TimesÂ  :
At least 21 people were killed and 33 injured, with seven in critical condition, after a bus crashed on Monday, January 25th, in the southern Brazilian state of ParanÃ¡, the Military Police Air Operations Battalion (BPMOA) reported.
According to the BPMOA, which initially reported 10 dead and six injured, the accident occurred on a stretch of road in the municipality of Guaratuba on the coast of ParanÃ¡, when the bus went off the road and overturned for reasons still unknown.
Local fire department captain Icaro Grenert explained to the press.
The bus was nearing the end of a 3,000-kilometer journey from Ananindeua in northern Brazil to Balneario Camboriu in the south with 53 passengers and two drivers on board when disaster struck.
It was not yet known why the bus went off the road, a military police official said.
Thirty-three among the survivers were injured, including seven who were flown by helicopter to different hospitals in serious condition.
Police said the driver escaped unhurt, and was taken in for questioning.