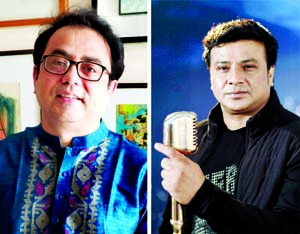 Entertainment Report :
Popular singer Mizan has lent his voice to a song titled Mon Kharap Meye recently. The lyrics of the song have been written by noted poet and journalist Mustafiz Shafi. The track has been released on YouTube under the banner of Dhruba Music Station recently.
Has been composed by Prince Rubel, Torik has arranged the music of it. Chandan Roy Chowdhury has directed the music video for the song.
While talking about the song Mizan said, âI have rendered many songs in my 20 years long career in music. The song is quite different from my singing style. Mustafiz Shafi has written the lyrics with utmost care. Prince Rubel and Torik also did a great job. I hope listeners will enjoy the song.â