Netherlands rocked by third night of rioting over Covid curfew 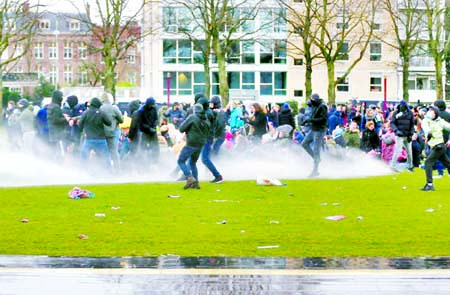 Police use a water canon during a protest against restrictions put in place to curb the spread of the coronavirus in Amsterdam, Netherlands.

Al Jazeera :
Dutch police arrested at least 184 people on Monday evening as a lockdown and nighttime curfew aimed at curbing the coronavirus pandemic led to a third night of nationwide unrest.
In the worst violence to hit the Netherlands in 40 years, riot police were called out in more than 10 cities, many of which had issued emergency measures to provide officers with greater powers to conduct searches.
Authorities clashed with rioters in several cities late into the night, as roaming groups set fires, threw rocks and looted stores.
At least 10 police officers were injured in the latest clashes, which left a trail of destruction in cities including the capital, Amsterdam, Rotterdam and The Hague.
"We have had riots in the past, but it's rare to have this for several nights across the entire country," National Police spokeswoman Suzanne van de Graaf said on Tuesday. "It's not only in known problem areas but much more widespread." "It's an outburst of anger that the Netherlands hasn't seen for many, many years," Vaessen said. "[And] This mix has also been provoked by far-right politicians who called on people to resist this curfew."
More than 470 people have been arrested during three days of unrest, with riot police deploying water cannon and officers on horseback to restore order in several places.
Dutch police chief Henk van Essen strongly condemned those taking part in the violence, saying "it has nothing to do any longer with the right to demonstrate".
"I have respect for those colleagues who have a hard time the past few nights," van Essen said on Twitter.
In Amsterdam, protesters threw fireworks, broke shop windows and attacked a police truck, but were broken up by a significant police presence.
Ten police officers were injured in Rotterdam, where 60 rioters were detained overnight after widespread looting and destruction in the city centre, a police spokeswoman said.
Supermarkets in the port city were emptied, while rubbish bins and vehicles were set ablaze. Rotterdam Mayor Ahmed Aboutaleb called the mob "shameless thieves".
In Brabant and 's-Hertogenbosch, rioters tried to get into hospitals, local media reported. Police cordoned off the entrances and ambulances had to be diverted to other clinics.
Amid the violence, two photographers were hurt after being targeted by rock-throwing gangs, one in Amsterdam and another in the nearby town of Haarlem, police said.
Van de Graaf said much of the aggression had been targeted at police officers.

Police unions meanwhile said the events in recent days marked the worst rioting in 40 years, referring to clashes between law officials and squatters in the 1980s as they were evicted from illegally-occupied buildings.
On Monday, Dutch Prime Minister Mark Rutte denounced the riots as "criminal violence".
"This has nothing to do with protest, this is criminal violence and we will treat it as such," Rutte told reporters outside his office in The Hague.
Some right-wing politicians, including Geert Wilders, have called on the government to send in the army to quell the riots. However, there is no indication that Rutte's cabinet is considering a military deployment.
The Netherlands's nighttime curfew, the first in the country since WWII, was imposed on Saturday after the National Institute for Health (RIVM) warned of a new wave of infections due to the so-called "UK variant" of COVID-19 despite weeks of declines in new cases.
Some 4,129 new cases were reported on Monday, the lowest number since December 1.
Violators of the 9pm (20:00 GMT) to 4:30am (03:30 GMT) curfew, which will remain in force until at least February 10, face a 95 euro ($115) fine.
There are a number of exemptions including for people who have to work, attend funerals or walk their dogs, providing they present a certificate.
The Netherlands was already under its toughest measures since the start of the pandemic prior to the curfew kicking into effect, with bars and restaurants having closed in October, and schools and non-essential shops shut since December.
Rutte and his cabinet resigned on January 22 over a scandal involving child tax benefits, but they will continue to govern until elections in mid-March.
Rutte has said he will remain to take decisions on COVID-19 policies until a new government is formed after the March 17 elections, seeking broad support for measures from both coalition and opposition parties.
The country's COVID-19 death toll stands at 13,579. It has recorded 952,950 infections to date.