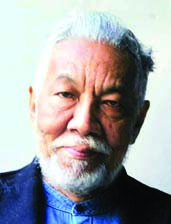 Syed Lutful Haque, artist and member of National Press Club, passed away at a city hospital early on Wednesday. He was 72.
He breathed his last at 5.30am at Dhaka Medical College and Hospital (DMCH), said a press release.
He left behind two sons, numerous relatives, friends, colleagues and well wishers to mourn his death.
Haque was admitted to the hospital on January 8 with pneumonia and shortness of breath.
He debuted his career in the daily Ittefaq in 1968. For a long time, he worked for Bengali Language daily newspaper 'Doinik Bangla' as well as the weekly Bichitra. His last workplace was 'The Independent'.Â  He was also a renowned painter and cover artist of the country. His most notable publication is "Dash Digonter Dash Bashinda".Â  He received the Shilpacharya Zainul Gold Medal, Atish Dipankar Gold Medal, Neepa Medal and National Press Club Writer's Honor Medal.Â  President of the National Press Club Farida Yasmin and its General Secretary Ilias Khan expressed deep grief over the death of Syed Lutful Haque and expressed deep sympathy to the bereaved family.Â  His first Namaz-e-Janaza was held at the National Press Club premises after Johr Prayers and later he was laid to rest at the city's Banani Graveyard following another Namaz-e-Janaza.