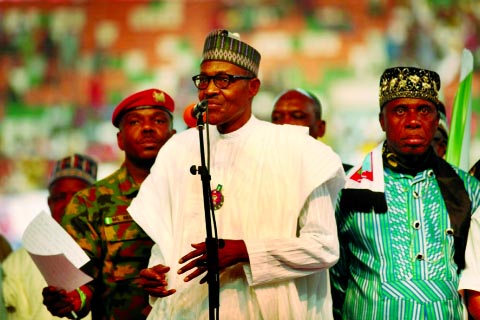 Al Jazeera :
Nigerian President Muhammadu Buhari has replaced the country's top military commanders after months of pressure over his response to the worsening security situation in the country.
Leo Irabor was named to the powerful Chief of Defence Staff post, which oversees the main military branches, the spokesman for the presidency said, while I Attahiru, A Z Gambo and I O Amao would command the army, navy and air force respectively.
"President Buhari thanks the outgoing service chiefs for what he calls their 'overwhelming achievements in our efforts at bringing enduring peace to our dear country'," the presidency spokesman said, telling Reuters news agency that some of the chiefs had resigned while others retired.
The statement did not give any reasons for the overhaul of the country's top-ranked commanders.
Buhari, a former army general first elected in 2015, came to power promising to tackle Nigeria's security problems.
Since 2009, at least 36,000 people have been killed in armed conflicts in Nigeria and violence has spread into neighbouring Niger, Chad and Cameroon, prompting the formation of a regional military coalition.