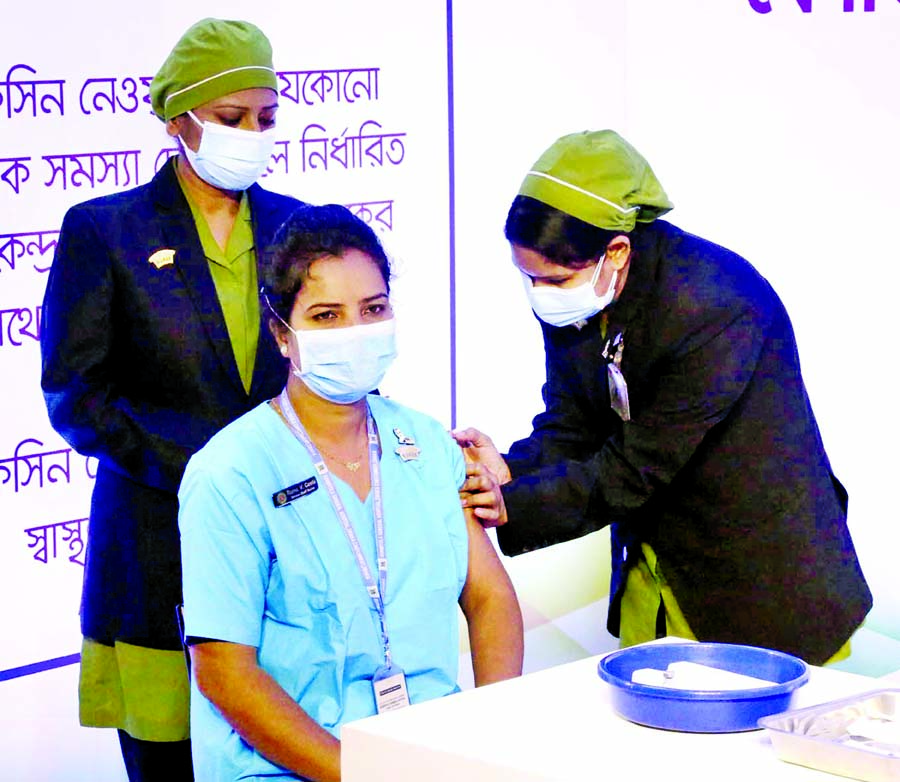 Staff Reporter :
Bangladesh on Wednesday began its long awaiting covid-19 vaccination programme with inoculating the first dose to Runu Veronica Costa, a Senior Staff Nurse at Kurmitola General Hospital, Dhaka.
Runu received her first dose of vaccine at 4:09pm on Wednesday.
After Runu, Dr Ahmed Lutfur Moben was given the inoculation at 4:10pm, Professor Dr Nasima Sultana at 4:12pm, Police ADC Md Didarul Islam at 4:13pm, and BrigadierÂ  General M Imran Hamid at 4:14pm.
Prime Minister Sheikh Hasina inaugurated the vaccination programme through video conferencing from her office, at Gono Bhaban around 4pm.
Health Minister Zahid Maleque was there.
Earlier, the six doses of the Oxford-AstraZeneca covid-19 vaccine was carried to the hospital at 11:30am.
The condition of all the initial recipients of the vaccine will be monitored for seven days, before the nationwide vaccination campaign begins on February 7, Health Minister Zahid Maleque has said.
Directorate General of the Health Services (DGHS) sources said, about 690 people will be vaccinated at the five government hospitals in Dhaka on Thursday as a continuation of the trial run.
Officials of DGHS said lists of the names of all the recipients of the jab in those hospitals have been prepared.
Â "Around 100 frontline workers, including 20 doctors, 20 nurses and other health workers from the hospital, would get the vaccine on Thursday," Dhaka Medical College Hospital Director Brigadier General Nazmul Huda told journalists.
DGHS sources said, about 294 teams will administer vaccines at 45 healthcare centres in the capital during the countrywide vaccination programme which will be started on February 7.
Besides, 6,431 teams will take part in the inoculation programme at 5,268 centres across the country. Â  The Directorate General of Drug Administration (DGDA) on Tuesday cleared use of the first shipment of five million doses of the Oxford-AstraZeneca vaccine which arrived in the country on Monday from India's Serum Institute.
Meanwhile, Bangladesh has received a shipment of two million vaccines as a gift from India.
Measures have been taken to vaccinate about 16.9 million people on a priority basis, Prime Minister Sheikh Hasina told it in the Parliament on Wednesday.
On November 5 last year, the Bangladesh government, India's Serum Institute, and the Beximco signed an agreement to import 30 million doses of vaccines developed by Oxford University and British-Swedish pharmaceutical firm AstraZeneca.
According to the agreement, SII would deliver over a period of six months with five million a month.