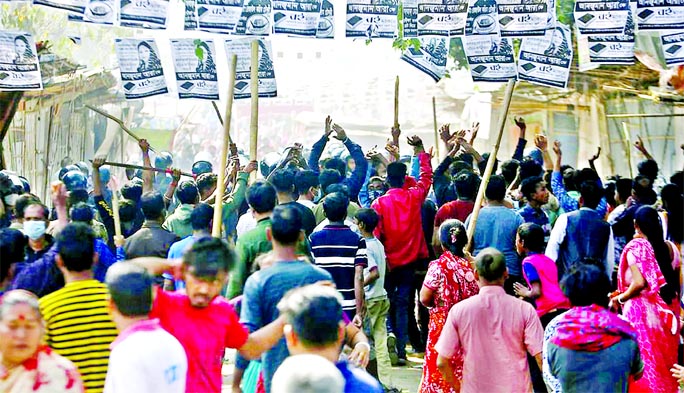 A clash breaks out between the supporters of ruling party candidate and rebel candidate at Pahartoli in Chattogram on Wednesday.

Chattogram Bureau :
The long awaited City Corporation Election of Chattogram was held yesterdayÂ  with scattered violences in a number of polling centres leftÂ  two supporters of the ruling party and BNP councillor candidates. In these incidents of chase and counter chaseÂ  andÂ  violences one killed in the hands of another brother in Bara Quarter areas of West Nasiraband ward under Pahartali thana.
The deceased identified as Nizamuddin Munna. His brother Salahuddin was allegedly accused for his murder. Munna was the supporter ofÂ  rebel AL councillorÂ  candidate Saber AhmedÂ  and the accused SalahuddinÂ  is the supporter of ruling party candidate Nurul Amin. Inspector of

the Pahartali thana Rashedul Islam said Munna was killed by stabbing and his brother Salahuddin is allegedly accused for this tragic incident.
Police is searching for arrest of Salahuddin, sources added.Â Â  Meanwhile, another youth named Alauddin was shot deadÂ  at Ambagan Technical School centre under Pahartali thana in the city following the clash between two rival candidates of councilor post. Alauddin hails from Cumilla and son of Md. Sultan Mia.
The clash broke out betweenÂ  the supporters of ruling party candidate and ruling party rebel candidate at polling centre at early morning. AssttÂ  SIÂ  of Chattogram Medical College camp Alauddin Talukder confirmed the death ofÂ  election violenceÂ  to this correspondent.
Besides, straw incidents were happened during the election periodÂ  in a numberÂ Â  centresÂ Â  left one EVM machine broken in Pathargatha ward centre. A total of about 50 supporters of ruling and opposition party were injured in election violence of whichÂ  35 instantly admitted to Chattogram Medical College Hospital.Â  Mentionable that police detained a councilor candidate of BNP named Ismail Hossain Bali of Pathergatha ward for his alleged involvement with the violences in Pathergatha, police added.
Jannatul Islam, the mayoral candidate of Islami Andolan Bangladesh, abstained from voting in the ChattogramÂ  City Corporation election. He made the decision after meeting the returning officer around 2.30pm on Wednesday . Â
Despite repeated phone calls to the Election Commission and the administration, we did not get any help. Boat agents were stationed everywhere. That is why I withdrew from the election. The total number of voters in theÂ  City Corporation election is 19 lakh 37 thousand 606.
Among them 9 lakh 46 thousand 73 are female voters and 9 lakh 92 thousand 33 are male voters. A total of 235 candidates are contesting in the election. Of these, 6 are mayors, 181 are general councillors and 56 are reserved councillors.
There are 6 candidates for the post of mayor - Awami League's M Rezaul Karim Chowdhury with the boat symbol, BNP's Dr. ShahdatÂ  with the paddy sheaf symbol.
According to returning officerÂ  sources , AL candidate Rezaul baggedÂ  48,600 votes and BNP candidate Shahdat Hossain got 6690 votes inÂ  123 centres.