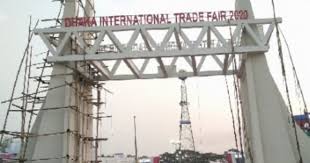 The 26th edition of the Dhaka International Trade Fair will not begin on Mar 17 as originally planned even though the preparations have been made to stage the event at the Bangladesh-China Friendship Exhibition Centre in Purbachal.
Commerce Minister Tipu Munshi announced the development during the hand-over ceremony of the new exhibition centre at the Secretariat on Sunday.
"We were preparing for the fair this year. Our preparations were centred on Mar 17 as the starting date. We initially got a consensus on this but because of the coronavirus situation, the prime minister has asked to proceed a bit slowly. I hope we can hold the fair at some point this year,"Â
The minister, however, could not provide a timeline for the fair this year but said that the event will be held on Jan 1 moving forward.
China State Construction Engineering Corporation started construction of the exhibition centre on 20 acres of land in Purbachal's Sector 4 on Oct 17,Â  2017. They subsequently announced the completion of the construction work on Nov 30 last year.
The commerce minister said that the centre would host fairs, product expositions and sourcing programmes throughout the year in future. China will also exhibit its products there twice a year.
According to the commerce ministry, the construction of the infrastructure was completed at a cost of Tk 7.73 billion, with the Chinese government providing Tk 5.2 billion in grant funds. The government has spent Tk 2.31 billion along with Tk 212.7 million from the EPB's own funds for this project.
Source: bdnews24.com