Democracy must prevail over autocracy 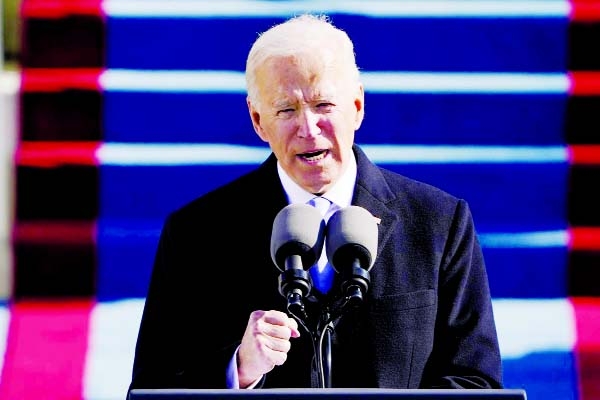 NPR News :
President Biden on Friday gave his first speech since taking office aimed at an international audience.
Making the case for his plans to turn the page on former President Donald Trump's "America First" ethos, Biden declared: "America is back" to the virtual crowd at the Munich Security Conference - a who's who of global national security officials.
"The United States is determined - determined - to reengage with Europe," Biden said. He called the partnership between Europe and the United States "the cornerstone of all we hope to accomplish in the 21st century."
The president also vowed to the nation's traditional allies that the United States is ready to work with them on issues ranging from arms control, COVID-19, cyberhacking and climate change.
"We are in the midst of a fundamental debate about the future direction of our world. Between those who argue
Â that - given all of the challenges we face, from the fourth industrial revolution to a global pandemic - autocracy is the best way forward and those who understand that democracy is essential to meeting those challenges," Biden said.
"Historians will examine and write about this moment. It's an inflection point. And I believe with every ounce of my being that democracy must prevail."
Earlier, he met with G-7 leaders about COVID-19. Both engagements are virtual due to the COVID-19 pandemic.
The Friday address comes a day after his State Department said the United States would be willing to attend a meeting with European partners and Iran to "discuss a diplomatic way forward on Iran's nuclear program" - the first signs of movement toward talks about rejoining the Iran nuclear deal, which Trump had quit. It was not immediately clear whether Iran would agree to meet.
Biden did not lay out a specific timetable for Iran talks. But a senior administration official told reporters ahead of the speech that "we are keen to sit down and hear what the Iranians have to say," adding that with Thursday's invitation to talks, "I think we have a path forward to return to nuclear diplomacy in a way that could ultimately put us on a positive path."
In his speech, Biden sought to cast the past four years as an anomaly and said that he is laying the groundwork for investments at home and around the world that will outlast his time as president.
The president also called out Russia and ask allies to work together to counter its efforts to undermine democracies.
"It's so much easier for the Kremlin to bully and intimidate individual states," Biden said, calling for closer cooperation among friendly nations.
Biden also referenced plans for the United States to chip in $4 billion to COVAX, a fund run by Gavi, the global vaccine alliance, and the World Health Organization, which aims to distribute COVID-19 vaccines to 92 low- and middle-income countries.