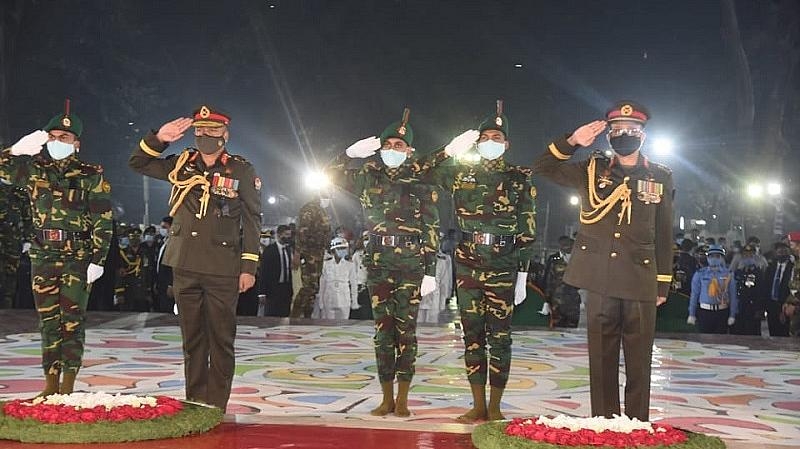 The people of Bangladesh have begun paying tribute to the heroes of the 1952 Language Movement who made the supreme sacrifice to establish the rights of Bangla as the mother tongue of the nation.

Bangladeshis stood barefoot at the Central Shaheed Minar in Dhaka and the memorials for the language martyrs across the country to place flowers on the monuments in the first hours of Sunday.

The immortal line -- ââAmar Bhaier Rokte Rangano Ekushey February, Ami Ki Bhulite Pariâ (Can I forget the 21st of February, incarnadined by the love of my brother?) -- is on everyoneâs lips.

Several youths were killed in police firing on Feb 21, 1952, to quell protests against the then Pakistan government decision to impose Urdu as the state language on the people of the erstwhile East Pakistan, who wanted Bangla to be recognised as the mother tongue.

The Language Movement began the intense alienation of the Bengalees and finally led to the Liberation War in 1971.

The UNESCO in 1999 declared Feb 21 the International Mother Language Day. Bangladesh observes the day as the Language Martyrsâ Day.

The day has come this year in a different context as the entire world is fighting the coronavirus pandemic with vaccines and restrictions on gatherings.

President Md Abdul Hamid and Prime Minister Sheikh Hasina open the observance of the day by placing wreaths on the monument at 12:01 am on Feb 21 every year. This time their military secretaries placed the wreaths on their behalf due to the outbreak.

It is a national holiday. The national flag flies at half-mast in honour of the martyrs. Social and cultural organisations hold programmes in observance of the day.

The government has themed the observance this year on inclusion and nurturing of multiple languages in education and society.

The authorities ordered all to limit the programmes to avoid infection.

At the Shaheed Minar, a maximum of five people will be allowed to place wreaths on behalf of their organisations, while no more than two individuals can place flowers.

President Hamid in a message marking the day emphasised the use of Bangla at all levels.

He also emphasised raising a global voice for protecting the language and culture of all ethnic groups, including the development of respective mother tongue and culture.

The aim of the language movement was to establish the right of âour mother tongueâ as well as to protect âour ethnicityâ, self-entity and cultural distinction, he said.

Hasina said the Language Movement paved the way for the inception of a non-communal, democratic, language-based nation and state system.

She also remembered all the language heroes, including Bangabandhu Sheikh Mujibur Rahman, who eventually led the independence struggle against Pakistan.

But a particular group of people is always active in denigrating the contribution of the Father of the Nation to the Language Movement, she said.

The prime minister said her government has ensured the use of Bangla in the ICT and introduced textbooks for ethnic groups in five languages at the primary level. It is also trying to get Bangla recognised as an official language of the United Nations, she added.