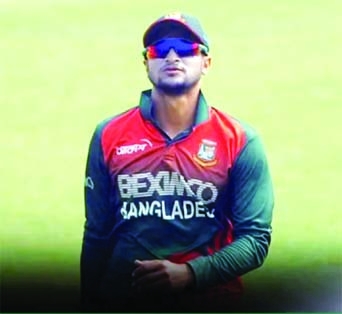 Sports Reporter :
Bangladesh all-rounder Shakib Al Hasan left to Dhaka on Monday to join his wife, who expecting a third baby in the United States.
Shakib had flown through Qatar Airways at 3:15 am along with his mother, said BCB official after he had flown away.
The ace all-rounder was granted paternity leave by the Bangladesh Cricket Board (BCB) on February 12 for upcoming New Zealand tour. The series includes three ODIs (as part of World Cup Super League) and three T20Is.
'I will definitely miss (playing).It would have felt good if I were able to play, but there's nothing to do actually. Let's see what happens. Best wishes to the team', Shakib said before leaving for USA.
Shakib will not only miss the New Zealand tour but also the two Tests (World Test Championship) tour to Sri Lanka in April as he set up a rare illustration in Bangladesh cricket, opting to play franchise cricket over national duty.
Shakib, who was bought by Kolkata Knight Riders (KKR) at INR 3.2 crore in the IPL2021 auction, sent an application to the Bangladesh Cricket Board (BCB) asking for leave, which was accepted.
Shakib's wife Umme Ahmed Shishir, and their two daughters named - Alaina Hasan Abri and Errum Hasan are residing in Wisconsin, United States of America (USA).
The World No 1 ranked ODI all-rounder Shakib made his return to international cricket last month with a player of the series performance against West Indies. He played brief part in the first Test against West Indies in Chattogram where he was ruled out of the series with thigh injury.