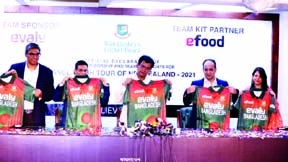 Sports Reporter :
Evaly, an e-commerce company of the country, has been named as the sponsor of the Bangladesh team for the forthcoming New Zealand series, which is starting from March 20. The team sponsorship has announced at the media center of SBNS on Monday.
Bangladesh will play a three-match ODI series, which is the part of the ICC ODI Super League and as many T20 Internationals during their tour in New Zealand. Evaly's affiliate e-food has been named as the team's kit sponsor.
Evaly acquired the deal with BDT 2 crore, said the Bangladesh Cricket Board (BCB) CEO Nizam Uddin Chowdhury who announced the name of Evaly as the team sponsor today at Sher-e-Bangla National Cricket Stadium.
This is not the first time the company is working with the BCB. Earlier, they were associated with the BCB in the Bangladesh Premier League (BPL).
"We've got Evaly as our official team sponsor for the New Zealand series. They are also the sponsor of our jersey alongside being a team sponsor. I hope Evaly will be with us in larger scale in future," the CEO said on Monday.
The jersey of the team was also unveiled after Evaly was declared as team sponsor.
Â "Thanks to the BCB for giving us the opportunity. Evaly was involved with cricket from the beginning. These days Technology-based companies are coming forward to involve with cricket. We are proud to be here." the company's chief executive Mohammad Russell said
BCB CEO said, once the ICC's Future Tour Programme (FTP) is finalized, the BCB will finalize a long term sponsor, who will be declared as team sponsor till 2023.
Bangladesh will play the first ODI against New Zealand on March 20 at University of Otago in Dunedin. The second ODI is on March 23 at Hagley Ovel in Christchurch and the third ODI is at Basin Reserve in Wellington on March 26. The first and third ODI will start at 4 am (Bangladesh Time) and the second one will begin at 7 am (Bangladesh Time).
The first T20 of the series will be held at Seddon Park, Hamilton on March 28 and starts at 7 am (Bangladesh time). The second ODI is at McLean Park, Napier on March 30 while the third T20 is at Eden Park, Auckland on April 1. The second and third T20 start at 12 pm (Bangladesh time).