EU to impose sanctions on Myanmar 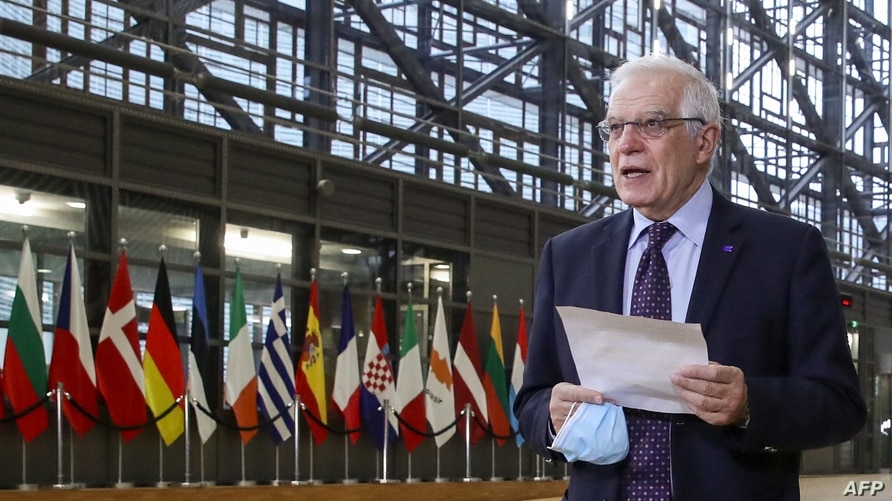 EU High Representative of the Union for Foreign Affairs and Security Policy Josep Borrell talks to the press as he arrives to attend an EU Foreign Ministers meeting in Brussels, Feb. 22, 2021.

VOA :
EU foreign ministers meeting in Brussels Monday have decided to prepare a series of sanctions against those responsible for the February 1 military coup in Myanmar.Â  Â
"The European Union calls for de-escalation of the current crisis through an immediate end to the state of emergency, the restoration of the legitimate civilian government and the opening of the newly elected parliament," the ministers said in a statement.Â  Â
"In response to the military coup, the European Union stands ready to adopt restrictive measures targeting those directly responsible. All other tools at the disposal of the European Union and its Member States will be kept under review," the statement said.Â  Â
Ministers are also likely to impose new sanctions on Russia for jailing opposition leader Alexey Navalny.Â Â  Â
Speaking to reporters ahead of the meeting, EU foreign policy chief Josep Borrell said, "it is clear that Russia is on a confrontational course" with EU, adding that "in the case of Mr. Navalny, there is a blunt refusal to respect their engagements, including the refusal of taking into account the decisions of the European Court of Human Rights."Â Â  Â
Weighing in on the case of Russia, German Foreign Minister Heiko Maas said he would support "issuing the mandate to impose such sanctions," on Russia and "preparing the list of individuals."Â  Â
"We need Russia to resolve many international conflicts, and so that will also be a question we must deal with: How is it possible to maintain a constructive dialogue with Russia, even though relations between the EU and Russia have certainly reached a low point?" Maas said.Â  Â
U.S. Secretary of State Antony Blinken is expected to join the foreign ministers' monthly meeting later in the day via videoconference to discuss Russia's crackdown on Navalny and his supporters, the coup in Myanmar, the Iran nuclear agreement, known as the Joint Comprehensive Plan of Action (JCPOA), and the situation in Hong Kong.