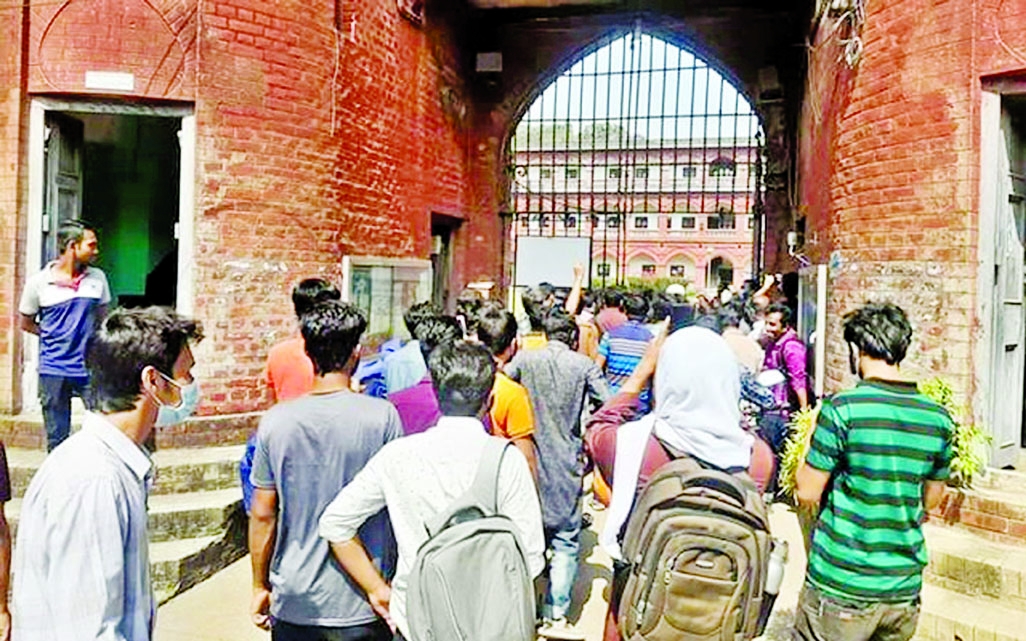 Some students of Dhaka University break into the Dr Muhammad Shahidullah residential hall on Monday demanding reopening of the dormitories.

News DeskÂ  :
The government has finally announced the date for a resumption of academic activities at all universities - public and private - from May 24, after Eid-ul-Fitr, against the backdrop of agitation by public university students.
The dormitories of public universities will be reopened for the students on May 17. The government has asked that dormitories occupied by agitating students over the last two days be vacated immediately.
Education Minister Dipu Moni made the announcement yesterday, hours after Prime Minister Sheikh Hasina instructed the authorities concerned at a cabinet meeting to examine whether the situation at present was conducive to a reopening of educational institutions amid the coronavirus pandemic.
The education minister said that residential students, teachers and other staff must be vaccinated before a reopening of the halls and no examination would be held before the universities reopened.
She said that 130,000 residential students would be vaccinated by May 17.
Hours before the cabinet meeting, some students of Dhaka University broke into the Dr Muhammad Shahidullah residential hall. However, they left the premises 30 minutes later.
Residents of Amar Ekushey Hall also entered their hall in defiance of the university authorities.
Students said it was a move to send the authorities a message that students could get into their halls whenever they wanted to.The students of Jahangirnagar University were still occupying its different dormitories, defying the university administration's instruction to leave the campus by 10am on Monday.
At the press conference the education minister said that the dates for the Bangladesh Civil Service (BCS) exams would be set considering the university reopening date. The age limit of BCS candidates for the entrance exams would also be considered.
Online classes are set to continue during this time and all kinds of exams will remain suspended during this time.
According to ministry sources, a total of 15,524 out of 5,75,430 teachers of public and private universities will get vaccine facilities.
Already the ministry has instructed all university authorities to prepare the campus for reopening in accordance with the health rules.
Dipu Moni said that the examinations which were being conducted now, including at the National University, should be postponed.
The minister also warned those who were creating "chaos" in the name of occupying university halls.
Dipu Moni said that the authorities of the university would not take any kind of responsibility if any students got involved in anti-disciplinary activities outside the educational institutions.
"But if anything occurs inside the campus, the university authorities will take steps," she said.
The universities will be opened first and then only will the rest of the educational institutions - secondary and higher secondary - be opened.
"Preparations at the schools and colleges have already been taken," she added.
The minister further said that after the opening of schools and colleges, the SSC and HSC candidates of 2021 will have classes six days a week on shorter syllabi.
After the completion of the syllabus, a test or pre-test will be conducted and a public examination will be organized for them. Students of other grades will be given classes one day a week.
After the coronavirus pandemic broke out in March last year, the government ordered all educational institutions closed from March 18 to prevent the spread of coronavirus. The closure was extended several times, most recently until February 28 this year.
Meanwhile, agitating students of JU said that they would not leave the halls for security reasons as several students had been injured in an attack on them by people of a village adjacent to the campus on Friday.
"We will take to the streets if the authorities forcibly evict us," said Tabia Islam, a participant in the protest.
However, ASM Firoz Ul Hasan, acting proctor of JU, said that the students would have to follow the government decision, adding: "If they do not leave the dorms, further action will be taken as per government instructions."
On the other hand, the DU was waiting for the Academic Council decision and was likely to follow government orders.
A group of DU students under the banner, "General Students of DU," issued a 72-hour ultimatum to the authorities to come up with the decision of reopening halls from March 1.
Tanvir Alam Chowdhury, a third year student of the criminology department, said they had talked with the DU VC and would wait till the decision of the Academic Council.
DU Vice Chancellor Prof Md Akhtaruzzaman said as the Covid-19 pandemic was a national concern, the government took all decisions centrally.
"We wanted to open dorms on March 13 initially. But that might be changed," he told this newspaper.
SM Monirul Hasan, registrar of Chittagong University, told this newspaper that there would be no other way but to obey the government decision considering the national health emergency situation. The CU would also follow the government's decision.
Prof Satya Prasad Majumder, VC of Bangladesh University of Engineering and Technology (Buet), told this correspondent: "The government decided to close the educational institutions and Buet went along with the decision. It will be reopened as per government decision accordingly."