Shirin Shila to work in new movie from March 5 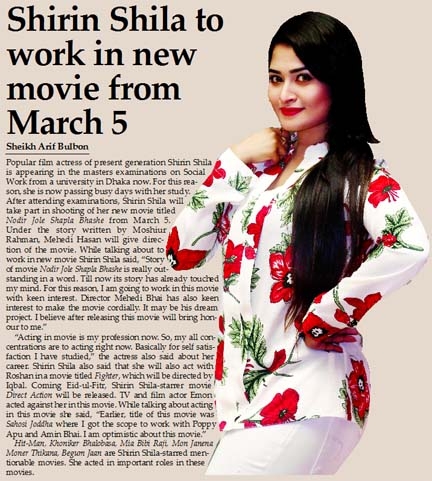 Sheikh Arif Bulbon :
Popular film actress of present generation Shirin Shila is appearing in the masters examinations on Social Work from a university in Dhaka now. For this reason, she is now passing busy days with her study. After attending examinations, Shirin Shila will take part in shooting of her new movie titled Nodir Jole Shapla Bhashe from March 5. Under the story written by Moshiur Rahman, Mehedi Hasan will give direction of the movie. While talking about to work in new movie Shirin Shila said, âStory of movie Nodir Jole Shapla Bhashe is really outstanding in a word. Till now its story has already touched my mind. For this reason, I am going to work in this movie with keen interest. Director Mehedi Bhai has also keen interest to make the movie cordially. It may be his dream project. I believe after releasing this movie will bring honour to me.â
âActing in movie is my profession now. So, my all concentrations are to acting right now. Basically for self satisfaction I have studied,â the actress also said about her career. Shirin Shila also said that she will also act with Roshan in a movie titled Fighter, which will be directed by Iqbal. Coming Eid-ul-Fitr, Shirin Shila-starrer movie Direct Action will be released. TV and film actor Emon acted against her in this movie. While talking about acting in this movie she said, âEarlier, title of this movie was Sahosi Joddha where I got the scope to work with Poppy Apu and Amin Bhai. I am optimistic about this movie.â
Hit-Man, Khoniker Bhalobasa, Mia Bibi Raji, Mon Janena Moner Thikana, Begum Jaan are Shirin Shila-starred mentionable movies. She acted in important roles in these movies.Â