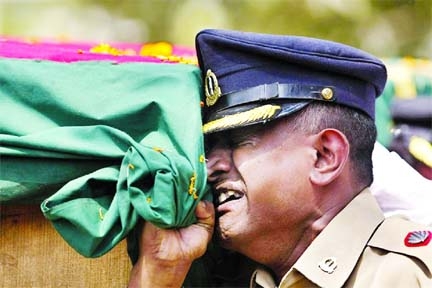 UNB, Dhaka :
The 12th anniversary of the atrocious carnage at the Pilkhana BDR (now BGB) headquarters in the capital will be observed today.
A total of 74 people, including 57 army officers, were killed in the carnage beginning on this day in 2009.
Marking the day, Border Guard Bangladesh (BGB) will organize Quran Khawani, doa, and milad mahfil.
Floral wreaths will be placed at the graves of the slain army officers at the Military Graveyard in the capital's Banani at around 9:00 am by the representatives of President Abdul Hamid and Prime Minister Sheikh Hasina.
Besides, Home Minister, chiefs of the three services, senior secretary to the Public Security Division under the Home Ministry, the Director General of the BGB and relatives of the slain officers will also pay their tributes to the slain army officers. BGB flags will be flown at half-mast at all Border Guard Bangladesh (BGB) installations and all BGB members will wear black badges to mark the day.
A special prayer and milad mahfil will be held on Friday after Juma prayers at BGB Central Mosque, Dhaka Sector Mosque and Border Guard Hospital Mosque at Pilkhana to seek salvation of the departed souls. Home Minister Asaduzzaman Khan will be present as the chief guest at the BGB Central Mosque.
Besides, senior secretary to the Public Security Division of the Home ministry, director general of BGB, relatives of the martyred, all officers working at Pilkhana, among others, will join the prayers.
On February 25, 2009, several hundred Bangladesh Rifles (now BGB) men rose up in an armed revolt at the Darbar Hall of the force's Pilkhana headquarters during the three-day "BDR Week". They killed 74 people, including 57 army officers.
The mutiny finally ended the following day (Feb 26) with the surrender of firearms, ammunition and grenades through a negotiation between the then government and the BDR rebels.
A total of 58 cases including one for murder and looting and the rest for mutiny were filed in connection with the incident.
Some 152 people were sentenced to death and 423 others to different jail terms in the killing case. Besides, 277 accused were acquitted in the country's largest-ever killing case.
Among the convicts, 262 mutineers were sentenced to different jail terms starting from three months to 19 years and 161 people, including late BNP leader Nasiruddin Ahmed Pintu and local Awami League leader Torab Ali, were sentenced to life imprisonment.
On the other hand, 5,926 BDR personnel were sentenced to different jail terms ranging from four months to seven years in the 57 mutiny cases.