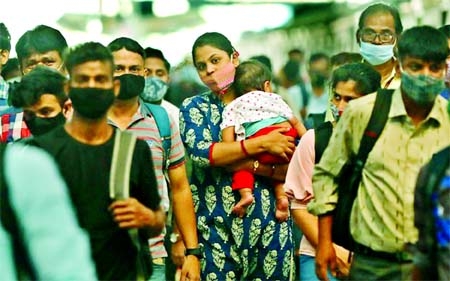 A woman carrying a child walks inside a railway station amidst the spread of the coronavirus, in Mumbai, India.

Reuters :
India is struggling to convince its health and front-line workers to take a homegrown COVID-19 vaccine controversially approved without late-stage efficacy data, government data showed on Thursday, days ahead of a wider roll-out.
The country has the world's second-highest number of COVID-19 infections after the United States, with cases recently surging as mask wearing declines and states have eased social distancing measures. A lack of confidence in a homegrown vaccine country could prevent India from meeting its target of vaccinating 300 million of its 1.35 billion people by August.
India has vaccinated more than 10.5 million health and front-line workers since beginning its immunisation campaign on Jan. 16. But only 1.2 million, or about 11%, of them have taken COVAXIN, the locally developed vaccine from Bharat Biotech, while the remaining 9.4 million have used the vaccine licensed from AstraZeneca, according to the government's Co-Win online platform used to track the vaccination drive.
India's federal government has so far ordered 10 million doses of COVAXIN and 21 million doses of the Oxford University/AstraZeneca shot. The government says it has received at least 5.5 million COVAXIN doses.
"It's all because of the initial discussion about how (COVAXIN) was only an experimental vaccine, how it had not completed the Phase-3 trial," said Dr Subhash Salunkhe, who advises the Maharashtra state government on vaccine strategy.
"These things created doubts in the minds of people, resulting in lesser acceptance.