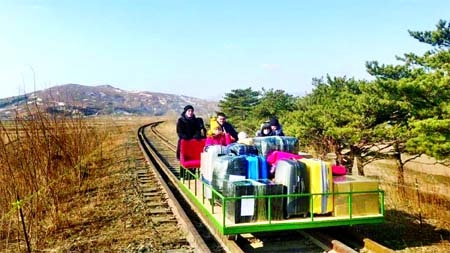 The group of Russian diplomats, which included children, pushed themselves for more than 1km over train tracks.

BBC Online :
A group of Russian diplomats and their families made an unusual exit out of North Korea on a hand-pushed rail trolley due to strict Covid measures.
The eight people travelled by train and bus before pushing themselves across the Russian border for about 1km (0.6miles) over train tracks.
North Korea has blocked most passenger transport to limit the virus's spread.
The country maintains it has not had any confirmed cases, but observers dispute this claim.
Since early last year, trains and wagons have been forbidden to enter or leave the country. Most international passenger flights have stopped as well.
The Russian diplomats were thus left with little choice.
"Since the borders have been closed for more than a year and passenger traffic has been stopped, it took a long and difficult journey to get home," Russia's Ministry of Foreign Affairs said in a Facebook post.
Photos shared by the ministry showed the diplomats on the trolley with their suitcases amid a wintry landscape. They were also seen cheering in a video as they crossed into Russia.
The main "engine" was the embassy's third secretary Vladislav Sorokin, who pushed the trolley across a rail bridge over the Tumen River into Russia, said the ministry.
This was after the group, which included Mr Sorokin's three-year-old daughter Varya, had travelled 32 hours by train and two hours by bus from Pyongyang to reach the Russian border.
Ministry officials greeted them at a station on the Russian side, and the group then travelled by bus to the Vladivostok airport.
Pyongyang's strict anti-Covid measures have affected travel movements and access to amenities. Extra troops have been sent to border areas with orders to block any possible transmission of the virus.
Over the past year, many foreign diplomats have left the country and Western embassies have closed.
Most travellers have gone overland and crossed the border into China, although there was one flight in March last year to Vladivostok carrying diplomats from Germany, Russia, France, Switzerland, Poland, Romania, Mongolia and Egypt.