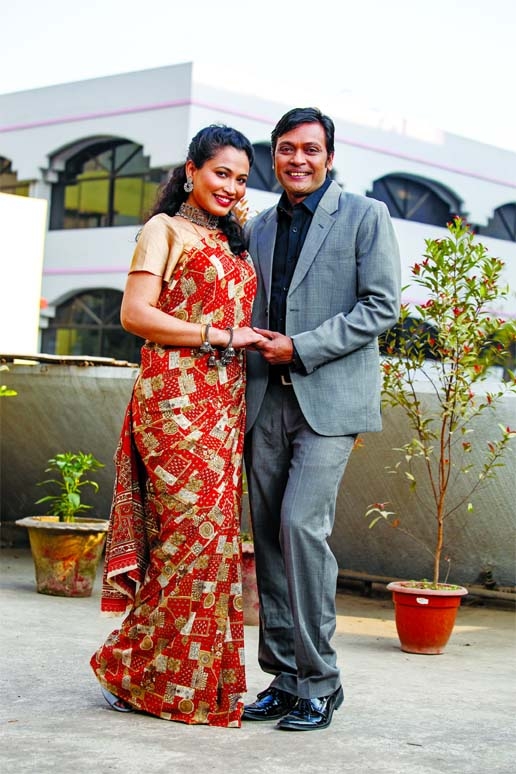 Entertainment Report :
Popular faces of the small screen Anisur Rahman Milon and Ishrat Jahan Chaity paired up for a drama serial titled Alo Andhar recently. Directed by Sanjib Das, story of the serial is written by Mohiuddin Ahmed. Shooting of the serial began at
a house in the capitalâs Uttara area recently where Milon and Chaity are playing
the role of sibling.
In the story of the serial it will be shown that both Milon and Chaity are hailed from a wealthy family. Milon and Chaity are playing the roles of Kabir and Farhana respectively in the serial. Milonâs mother loves her son very much. Due to affair related complications Kabir (Milon) gave divorce to his wife. Basically, he had an extra marital relationship with friend of his wife. Later, he again tied the nuptial knot with a village girl under family arrangement. He brought his bride to Dhaka. Then complexities started in the family.
On the other hand, Farhana (Chaity) is only a housewife. Due to hail from a rich family Farhana has to bring money for her husband from own house, which makes her embarrassed.
While talking about acting in the serial Milon said, âIn fact, I am acting in such story and role for the first time. I am playing in the leading role in the serial. I believe viewers will enjoy watching the serial.â
Chaity shared her feelings by this way, âAfter a long time, I am acting in a drama serial. My role is also attractive. There is a scope to show acting. I give thanks to the director to give me the opportunity to work in the serial.â
Besides acting in movies, Milon is regularly acting in TV dramas and serials. Meanwhile, Chaity is also performing as model in TVCs besides acting.Â Â