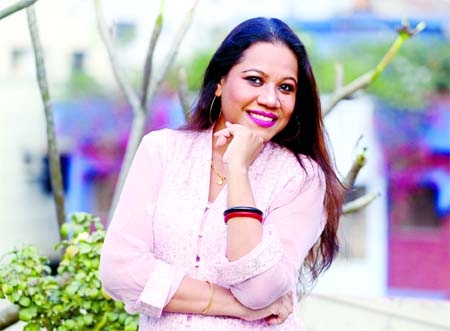 Sheikh Arif Bulbon :
Voice warrior of Swadhin Bangla Betar Kendra, Ekushey Padak winner noted singer Rathindranath Royâs daughter Chandra Roy started her journey in the field of music to keep in mind the ideology of her father. In 2007, Chandraâs debut solo original song titled Monero janalai chupi chupi eshe was released.
Dr Nesar Ahmed wrote lyrics of the song
while Nadim Ahmed composed its music.
Later in 2008, Chandraâs debut solo album titled Borshar Himel Hawa was released under the banner of Laser Vision which music was composed by late Basudev Ghosh. After taking a long time break, she is going to release her two new songs - Janalai Brishti Fota and Koto Kore Chai Tomai. Ronju Reza wrote lyrics of these two songs. Popular singer and music composer SI Tutul composed music of the first song where along with Chandra Tutul will also lends his voice. The second song was composed by popular singer Imran Mahmudul.
While talking about to release her two new songs Chandra Roy said, âI am very much optimistic about these two songs. To pay tribute to Tutul Bhai, am saying he is not only a famous singer but also a good music composer of the country. It is really a great opportunity for me to work under his music composition. On the other hand, I had dreamt to render song under Imranâs composition. He did the work so nicely that I am very much eager for releasing the song now.â Chandra Roy also said that she got primary training in music from her mother Sondhya Roy. Later, she also received training from her paternal aunty Swapna Roy, younger uncle Surojit Roy and noted Nazrul singer Khairul Anam Shakil, among others.