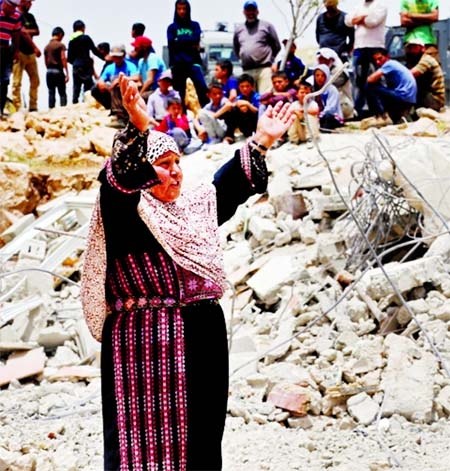 AFP :
The United Nations and European members of the Security Council on Friday called on Israel to stop demolitions of Bedouin settlements in the Jordan Valley, and for humanitarian access to the community living in Humsa Al-Baqaia.
In a joint statement at the end of a monthly session of the Security Council on the conflict in the Middle East, Estonia, France, Ireland, Norway and the United Kingdom said they were "deeply concerned at the recent repeated demolitions and confiscation of items, including of EU- and donor-funded structures carried out by Israeli authorities at Humsa Al-Baqaia in the Jordan Valley."
It said the concern was also focused on the 70 people or so living in the Bedouin community, including 41 children.
"We reiterate our call on Israel to halt demolitions and confiscations," the statement said. "We further call on Israel to allow full, sustained and unimpeded humanitarian access to the community in Humsa Al-Baqaia." Humsa al-Baqia sits in the Jordan Valley, a fertile and strategic patch of land that runs from Lake Tiberias to the Dead Sea, which has emerged as a flashpoint in the struggle over the West Bank.
The Jordan Valley is home to approximately 60,000 Palestinians, according to the UN, but nearly 90 percent of the land is part of what is known as Area C, the three-fifths of the West Bank that is under complete Israeli control.
It includes closed military areas and about 50 agricultural settlements housing some 12,000 Israelis. Seizure of properties
Palestinians are barred from those areas and from the lands they own. They are forbidden from digging wells or building any kind of infrastructure without hard-to-get military permits.