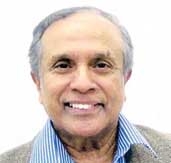 Thalif Deen :
A sign outside a laundry in New York city had a frivolously flippant slogan: "We launder dirty clothes, not dirty money."
And a 2019 movie titled "Laundromat," based on a book 'Secrecy World' by Pulitzer Prize winning author Jake Bernstein, exposed the byzantine world of money laundering.
That's the insidiously darker side of the world's financial system - with millions of dollars in ill-gotten gains finding safety in offshore banks- a crime perpetrated on a global scale, says a High-Level Panel on International Financial Accountability, Transparency and Integrity for Achieving the 2030 Agenda (FACTI).
Ibrahim Mayaki, FACTI co-chair and former prime minister of Niger points out closing loopholes that allow money laundering, corruption and tax abuse and stopping wrongdoing by bankers, accountants and lawyers are steps in transforming the global economy for the universal good.
In a report released February 25, the UN panel has called on governments to agree to a Global Pact for Financial Integrity for Sustainable Development.
The panel, comprising former world leaders, central bank governors, business and civil society heads and academics, says as much as 2.7 per cent of the global gross domestic product (GDP) is laundered annually, while corporations shopping around for tax-free jurisdictions cost governments up to $600 billion a year.
At a time when billionaires' wealth soared by 27.5 per cent, even while 131 million people were pushed into poverty due to Covid-19, the report says a tenth of the world's wealth could be hidden in offshore financial assets, preventing governments from collecting their fair share of taxes.
Recovering the annual loss to tax avoidance and evasion in Bangladesh, for example, would allow the country to expand its social safety net to 9 million more of the elderly; in Chad, it could pay for 38,000 classrooms, and in Germany, it could build 8000 wind turbines, according to the report.
Professor Kunal Sen, Director, UN University- World Institute for Development Economics Research (UNU-WIDER), told IPS: "At a time when developing countries are facing sharp declines in tax revenues due to the economic crisis generated by the pandemic, it is imperative to find solutions to the large losses to public exchequers due to illicit financial flows"
This is a key challenge to development, as provision of crucial public services, such as education, healthcare, and infrastructure, rely on states having money to spend, he pointed out.
James A. Paul, a former Executive Director at Global Policy Forum, told that the new report by the UN High Level Panel is certainly welcome, but there is reason to wonder where it will take us.
"It provides a devastating analysis of the corrupt global financial system and how the financiers undermine well-being, fairness and legitimacy".
The report, he said, argues that the system's architecture and rules make sustainable development (and the UN's 17 Sustainable Development Goals) difficult, if not impossible to achieve.
"Those who have been critically following the global financial system over the past few decades will not disagree, but they will find little here that is truly new", said Paul, author of "Of Foxes and Chickens"-Oligarchy and Global Power in the UN Security Council.
He also pointed out that "It has been clear, then, for a long time that the world's richest families and nations are the primary beneficiaries of this system, that they have a hammerlock on politics, and that they have no intention of changing things in any fundamental way".
In particular, the national leaders of this global corruption mafia are nationals of the United States and the United Kingdom, whose financial institutions and oligarchies are the world's most powerful, he added.
This brings us to the dilemma of the UN- and its capacity to analyze and to resolve the world's most fundamental problems".
However, he said the Presidents of the UN General Assembly and the Economic and Social Council are to be congratulated for setting up this Panel and for reminding us once again how the global oligarchy is practicing corruption on a breathtaking and devastating scale.
The report's authors are unable to go far enough, however. This is no surprise.
Dr. Richard Ponzio, Senior Fellow and Director of the Global Governance, Justice & Security Program at the Stimson Center in Washington, D.C, told IPS that aside from eroding national tax bases and diverting funds from critical public expenditure projects, tax abuse, corruption, and money laundering help fuel insecurity in today's hyperconnected global economy by sustaining the work of criminal syndicates and international terrorists to the detriment of global security and justice.
For developing countries to fully realize the benefits of this new transparency, he said, the developed world and international institutions should recognize and help overcome the financial and capacity restraints that prevent less well-off countries from participating in a multilateral regime for AEOI. Simultaneously, developed and developing countries should promote the transparency of corporate registries to prevent money launderers from operating behind shell companies.
Paul told that NGOs, both local and international, have long been pointing out the staggering sums diverted from public treasuries by banks and financial managers, aided by corrupt politicians and systematically covered up by journalists, professors and other apologists.
The honest investigations have shown, among other things, how taxes are avoided or evaded and how the richest individuals and companies pay almost nothing in support of public projects and programs.
"This knowledge has deepened public distrust of governments and it has led us into the present crisis of global authoritarianism, but it has done little to change regulatory laws, improve the harvesting of taxes, or reduce public corruption. If anything, the trend has been moving in the opposite direction."