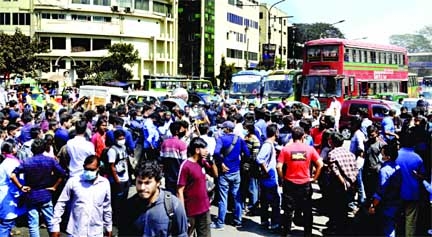 Protesters gather for the second day in the capital\'s Shahbagh area on Saturday demanding justice for writer Mushtaq Ahmed\'s death in custody after being imprisoned for almost a year under the Digital Security Act.

Staff Reporter :
Leaders and activists of six progressive leftist organizations have staged a protest rally against the death of writer Mushtaq Ahmed in Gazipur prison.
At that time protesters also voiced against the attacks on protesters on Friday evening as well as the repeal of the Digital Security Act.
They brought out a procession from the Teacher-Student Centre (TSC) of the Dhaka University around 12 pm on Saturday.
After that the procession turned around Shahbaghand went towards TSC again. At that time, the police were on alert in front of Shahbagh police station.
In the demonstration, Al Kaderi Joy, Convener of Progressive Students' Alliance, demanded "the draconian Digital Security Act be abolished."
He demanded immediate release of the detained eight fellow activists, and justice for the police action against the demonstrators on Friday evening.
Speaking at the protest rally, general secretary of the Socialist Student Front, Nasir Uddin said Mushtaq wrote against corruption in April last year and "looting during COVID-19 pandemic. But the government was intolerable. He was reportedly tortured in prison. He sought bail six times but he was denied bail."
He went on saying, "We're protesting the deprivation of democratic rights because of irrational laws like the Digital Security Act. We're demanding immediate repeal of the Digital Security Act."
Hundreds of leaders and activists of six left organizations including Chhatra Front, Chhatra Federation, Chhatra Maitri and Chhatra Union took part in the protest procession.
At the same time they also demanded the release of cartoonist Kishor.
Besides, Bangladesh Chhatra Federation held a separate rally at the foot of Raju Bhashkorjo in TSC area at 11am. Later, they moved to Shahbagh area where they joined the left-leaning organisations.
Chhatra federation president Golam Mostafa said that government is trying to stop the voice of people.
Meanwhile, members of Bangladesh Students' Rights protection Council also held a protesting program at National Press Club in the capital on Saturday.
Earlier, protests erupted in the capital on Friday while dozens of demonstrators were injured in clashes with police in Shahabagh.
Mushtaq was charged under the Digital Security Act after he was arrested from his Lalmatia home on May 8 last year.
He fell sick in Gazipur's Kashimpur High Security Prison on Thursday and was taken to the prison hospital.
He was then transported to the Shaheed Tajuddin Ahmad Medical College and Hospital, where he was pronounced dead.
He was allegedly charged for Facebook posts that were critical of the government's handling of the Covid-19 pandemic.
Mentionable that calls for Mushtaq's release were widespread and sustained throughout his time in prison. Soon after his arrest, more than 300 dignitaries in Bangladesh issued a joint statement demanding his release, as well as the release of cartoonist Ahmed Kabir Kishore.
Amnesty International reiterated the demand in a statement as recently as January, saying the duo (Kishore and Mushtaq) had been arrested "solely for the peaceful exercise of their right to freedom of expression."